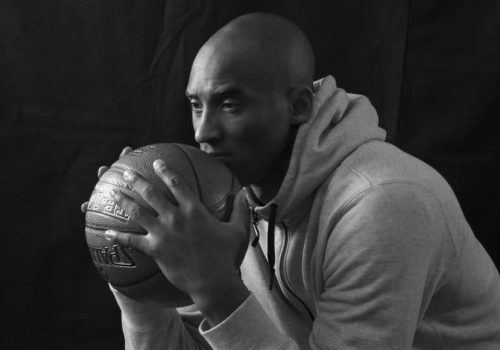 This is the eighth installment of the online series by Peter Fetterman Gallery called the Power of Photography highlighting hope, peace and love in the world. We invite you to enjoy and reflect on these works during this time.

I love sports imagery and I love portraits and this image has it all. Taken by the great photographer, Walter Iooss Jr., who has dedicated his life to capturing the greatest images of so many sports occasions it is more than just a portrait of a great athlete.

Taken on the occasion of Kobe’s retirement, it has the power and pathos appropriate to the occasion. As Michael Jordan said of Walter, “He’s quick and he is good.” I think here he is slow and really great and as quiet and self reflective as his subject is. A special moment, a special image.

I love rich albumen 19th Century prints that I have never seen before and probably will never see again. And I love images shot from behind which have such a sense of mystery. I like to be seduced into the narrative of an image whose meaning I cannot quite really grasp. Such is this beautiful image taken by an underrated master Italian photographer. I keep going back and back again to view it since I first purchased it maybe 15 years ago… What is exactly going on? As a romantic I think this is a secret assignation between two lovers. Maybe even passing passionate letters through the slit in the window. It doesn’t matter if I am right or wrong. I just know it intrigues and moves me. That is the gift this photo has always given me.

Burt Glinn was one of the most sophisticated and intelligent photographers I have ever met. A man of gentle humor and generosity of spirit and great insight and sensitivity to the human condition. One of the great Magnum photographers who also served as its President on two occasions.

I have always loved this image of Warhol and Sedgwick and Chuck Wein (one of Warhol’s Factory assistants) seemingly climbing out of a man hole. I don’t think anyone could pull off a similar shot today in the boisterous Manhattan traffic chaos.

It always puts a smile on my face, especially now.

The Power of Photography is such that words are often unnecessary. The image says it all. I have always felt this way about this great Elliott Erwitt image, never more so than now.

This has always been one of my favorite images since I first came across it in the 1970’s. I would say honestly it belongs in the category of, “If my house was on fire which photos would I grab first.”
Just writing about it now makes me very emotional. It is a touchstone for me.

One of my greatest regrets was I did not not meet Giacomelli in person. I was totally obsessed with his work and wanted to see if it would be possible to collaborate with him. His reputation was that he was totally uninterested in any kind of material success. He just wanted to be left alone to create his images without any distractions – a position I respected, but my love for his work would never leave me so I prevailed. A photographer friend knew him well and he agreed to finally meet with me. I was to fly to Italy. Everything was arranged and the three of us were to meet up in his home. A dream come true. Sadly he became ill a couple of weeks before I was due to leave and passed away shortly thereafter.

Giacomelli was born into a very modest family and when his father died when he was 13 years old he had to leave school and went to work as a typographer to help support the family. He spent most of his life working at his job spending his weekends and holidays pursuing his own art.

The structure of this image is pure genius. He creates a unique atmosphere like I had never seen before from which dark and out-of-focus figures emerge with only one single and central subject that is sharp: a boy in the middle distance who looks into the camera, framed by fleeting black hallowed foreground figures and strolling with his hands in his pockets, followed by two identically dressed old women.

The image is haunting and I guess I have always identified with the little boy and always will. Next year The Getty Museum is planning a big Giacomelli exhibition. Something definitely to look forward to.

This little gem of a photograph has always haunted me since I first saw a print of it in the late 1970’s. It just radiates an enormous sense of beauty and energy which transcends its apparent simple subject matter. It tells stories within stories and has a deep, deep humanity to it.

Well Summer is here and hopefully some respite from the current challenges.

I’m often asked, “What makes a great photograph?” Sometimes it’s hard to articulate but this Martine Franck image certainly is the answer that comes to mind, as something that “haunts” you.

I’m not sure why this image has always haunted me since the first time I saw it, but I never get tired of looking at it. It has what so many great photos have – “MYSTERY.” I’m not quite sure what is going on or the relationship between the figures, but it doesn’t matter. It is beautiful with it’s use of shapes and shadow and that most important element – LIGHT.

Carl Mydans was one of the great LIFE Photographers having cut his teeth working for the Farm Security Administration in the 1930’s, along with his distinguished colleagues Dorothea Lange, Arthur Rothstein, Ben Shan, Marion Post Wolcott, and Walker Evans.

This is real evidence of the Power of Photography – how one shot of commuters pouring over newspapers reading the story of President Kennedy’s assasination captures the emotional intensity of this moment in world history.

Whenever I need a pick me up I look at this hilarious photograph. It was taken by my friend, Grace Robertson. who turns 90 years old today.

Grace was one of the pioneer women photojournalists who worked for “Picture Post,” the UK equivalent of Life Magazine. Her most beloved story was “Mother’s Day Outing” originally published by Picture Post and two years later re-commissioned by Life Magazine which follows a group of working class women who were friends from a local pub. They leave their men behind, hire a bus to transport them for a day trip to the Coast or as we say in England the “seaside,” fill the bus up with beer and food and just escape from everything. As the day progresses they become more and more tipsy and more and more uninhibited as only women in the company of women can do…Free from all their domestic responsibilities.

As Grace says of the day, “I set off on the Saturday with the women in the coach. Their energy was awesome. These women were survivors. These were women in their fifties, sixties and seventies and they had been through two world wars and the Great Depression in the middle. They were incredibly exuberant. And inspiring.”

Happy birthday Grace and thank you for this gift which keeps on giving.

My longest and most intense professional collaboration has been with Sebastiao Salgado. We first started working together,well it must be over 30 years now since Henri Cartier-Bresson and his wife Martine Franck first introduced us.

It has been an amazing journey as I have watched him develop his epic photo projects with such passion and dedication and execute them to the highest professional and ethical standards. This journey has been shared with his equally amazing wife and artistic partner, Lelia Wanick. I have never seen two people so professionally in sync and they have been such an inspiration to me and continue to be a big, big part of my life.

I sincerely believe Sebastiao is the greatest living photographer and his position in the history of this medium is unassailable. With the founding of their remarkable non-profit rainforest project Instituto Terra and the planting of 4 million trees to date to say they are both forces of nature is a vast understatement.

I am looking forward to the launch of their next and last epic project “Amazonia” next year. This beautiful and haunting image above is part of it.