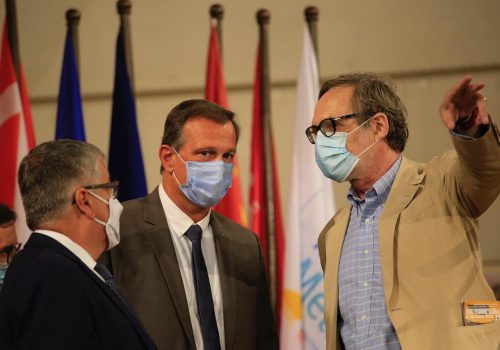 Jean-Francois Camp who was one of its pillars and essential sponsors attended. He sent us this text!

At the inauguration of the Visa pour Image festival in Perpignan, good intentions flourished under the masks.

Renaud Donnedieu de Vabres opened the ball, congratulating himself on having been able to keep his commitment to allow the festival to take place this year, despite the circumstances of Covid 19. We must recognize it is a feat, not only to to be able to present some twenty exhibitions of very high standards but also to inaugurate a new form of presentation of “virtual” evenings. The former minister wished to underline the financial support of his successor Franck Riester as well as warmly thank the president of the Region, Hermeline Malherbe (PS) of socialist tendency who finally decided to integrate the too small clan of institutional partners of the festival.

In response to the President of Visa she gave us a fiery speech in defense of freedom of information, knowledge of individual commitment etc …

We were all impatiently awaiting the speech of the new mayor Louis Alliot to know the fate of the festival. The mayor in a simple and direct way insisted on his desire to see the festival not only exist but develop. To underline his commitment he did not hesitate to quote Cicero and Voltaire to illustrate his convictions of being “ready to fight so that those who do not share his ideas can express them freely”.

Regardless of all these professions of faith, it is interesting to note how much the municipality has given new means to the Off festival so that it can widely and massively express itself in the city outside, Covid obliges. This new policy, which allows all merchants to exhibit various and varied reportages at the entrance of their store, offers the advantage of allowing everyone to express their photographic talent according to the choice of each sponsor. This highly successful appropriation of public space proves how much photography has taken hold in the hearts of the Perpignan residents.

It is therefore perhaps the moment for this new team to achieve what all the previous mayors had promised us, namely a Grand Museum of Photojournalism Roger Thérond, the Director of Paris Match without whom Visa would not exist, and to deliver the keys of the Convent of Minimes to the Visa pour l’Image Association in order to be able to carry out this great project which would finally definitively place Photojournalism in the heart of the Catalan city. After 32 years of unwavering financial contribution, the people of Catalonia and Occitania well deserve this.