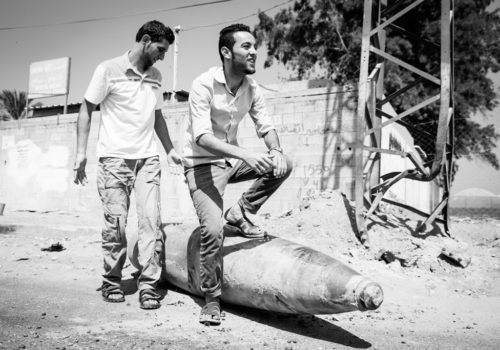 Every year, as part of the Visa pour l’Image festival, L’Association Nationale des Iconographes (ANI) invites photographers to portfolio reviews at the Palais des Congrès in Perpignan. This year more than 400 photographers participated. Emmanuel Zbinden and Laetitia Guillemin of the ANI shared with us some of their favorites.

Life in the Gaza Strip

Gaza is a war zone where civilians live and die every day. The conflict has been raging for more than half  a century and there doesn ́t seem to be an end in sight. The international community refuses to recognize this situation as an actual war and send in UN troops to mediate between the two sides. In the Gaza Strip there is no army, instead they have Al-Aqsa, the resistance and a few other groups that are described as terrorist organizations. Israel has a larger population,  trained as soldiers when eighteen years old that be called upon to  fight when the government considers it necessary.

If you look for words to describe Gaza you might think of rockets, injuries and destruction but the word is “normality”. With a population of t wo million people, two hundred thousand of them are refugees inside of their own country. Without housing and for the most part without electricity, food and water, they have to adapt their lives to this situation. Staying inside UNRWA schools and waiting for the shelling to end is not an option.

Each ceasefire is a very active period with people running to their houses and taking anything that might be useful. Others look for their dead who couldn’t find a safe place and who have ultimately died because Israeli bombs gave them an inappropriate burial.