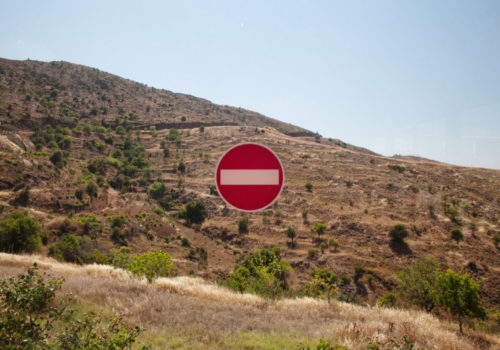 “The comic does not exist outside the pale of what is strictly human (…) You may laugh at a hat, but what you are making fun of, in this case, is not the piece of felt or straw, but the shape that men have given it, the human caprice whose mould it has assumed.”
Henri Bergson, “Le Rire”, 1900

The road network in Cyprus is as bizarre and confusing as the island’s history itself. Since 1974,The island of Cyprus has been split into two separate geographical areas – the turkish in the north and the greek in the south – , each with its own language, culture, religion, legislation , political and economic system. Mobile phones with Greek Cypriot SIM cards do not work in the Turkish Republic of Northern Cyprus. In addition, once the border checkpoint has been crossed, the GPS no longer recognises the streets’ names, as the Republic of Northern Cyprus is officially acknowledged only by Turkey. On the other hand, the maps available in the south still display the Greek names that were in use before the Turkish occupation of 1974, although Turkish Cypriots do not understand the Greek language and even use a different alphabet. Thus, for example, Kyrenia, Morphou and Ammostochos are also referred to as Girne, Guzelyurt and Gazimagusa. This system of duplicate names obviously leads to a great deal of confusion, and makes it nearly impossible to reach a destination following the directions of official maps. This is the motivation undelrying the “Roundabout Cyprus” project, aimed at ironically analyzing the consequences of  Cyprus political deadlock on the geography and topography of an island that remains, to this day, the last divided country in Europe.

We were born in the 80’s in Rome (IT) and we’ve been living and studying between Rome, Paris and Marseille. We first met in Tahrir Square during the second wave of the Egyptian Revolution, at the end of November, 2011. We often work as a collective, always researching the paradoxical aspect of daily life.