Per Morten Abrahamsen – The Lake and Other Lies 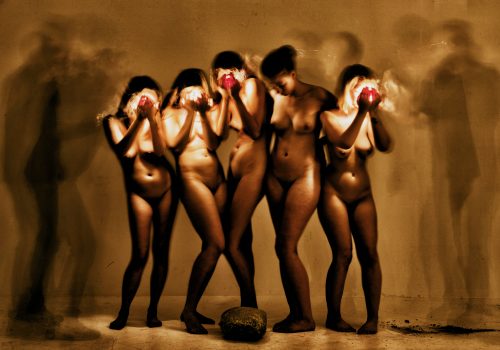 The work of Per Morten Abrahamsen has always been supported by some recurring values: radicality, non-orthodoxy, transgression. It is also characterized by a playful side, a desire to tell stories and a constant challenge to one’s own expressive abilities. Abrahamsen works on photography staged, and he creates scenes and expressions that represent often an altered reality, where the man seems disarmed and alone – despite his cohabitation with others.

In the exhibition “The lake and other lies” Abrahamsen presents four photographic series. All, with new shots and a new composition, are a continuation of earlier works whose source of inspiration is the period of late Romanticism, clad of a contemporary dystopia. In The Lake series, he works on the landscape – we are at night by a lake, photographed over a period of one year. The photographs are very dark – water, sky, trees and bushes form part of a fragmented immersion in an absurd and isolated reality where the man is portrays as naked and fragile. The photos are imbued with sadness – a feeling of end and lost hope. As if an assault had took place – but we do not know who the victim is and who is the culprit, the nature or the man.

In the Light series, Abrahamsen worked on light and bodies humans. On one of the photos we see women’s bodies – passive, objectified and lifeless. On another, five women standing, naked, the hands in front of the face. On others we see an interaction between two people, and on others still a body alone. Common to all photographs is light. A filament of light – a motive bright – crosses the body as a guest uninvited – aggression – a truth that zigzags through the moment and freezes it, in an unpleasant state of nothing. We have an impression of punishment. That something has arrived and these moments out of time are all that remains. Finally, Abrahamsen presents a number of portraits of Danes known and unknown, as well as a series of “plastic” portraits where water and plastic disrupt familiar faces that seem to be unreal reflections of themselves.

With these series, Abrahamsen works on the representation of men and women of our time. On decadence and madness in our time. The works can be seen as a criticism unformulated society, and ourselves as the decisive actors of the future to which we are going. Where are we ? Where are we headed?

Per Morten Abrahamsen – The lake and other islands