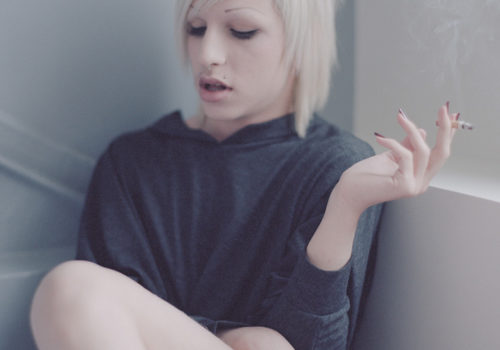 Dorothée Smith’s elusive photographs reflect a suspended world where the characters express a desire to be themselves, just like anybody else. Their soft and luminous portraits reveal their transgender being and the landscapes are the medium of an unspeakable reverie. The delicacy of the figures, the misty atmosphere, the evanescent colors set these images apart from the raw and provocative photographs of Larry Clark and Nan Goldin, who laid bare members of the underground scene in the 1970s and ‘80s. Two decades later, for Dorothée Smith, no violence seems necessary, not even decadence, but rather a subtle shift combined with a photographic instant, fleetingly capturing people who are sometimes disturbing but always elegant. In this technically iconoclastic work, using the view camera as the most modest of equipment, the artist flirts with the unattainable concept of aura. Some of these portraits are destined to become iconic.

In connection with the exhibition, Smith will also be presenting a large video installation, “C19H28O2 (Agnès)” produced during a residency at the Studio National du Fresnoy. Reconfigured for the Pavillon Vendôme, the video revolves around a sculpture, a monumental projection and multiple screen-frames where micro-stories are told. For this work, Smith was inspired by the story of Agnes, a young transgender whose story was told in a 1967 sociology book, Harold Garfinkel’s Studies in Ethnomethodology. Using a brief report on the case, Smith has composed a stunning visual opera that will allow the eye and the mind to hear a non-conformist, existential mode. The videos show fantastic characters interpreting the various possible transformations of a body. Some enter into a choreographic trance while others are reincarnated to become the muses of a new era. The films serves as complementary theatrical scenes which immerse the viewer in a powerful visual and narrative world. Stealthily, wandering from one screen to another, the viewer is brought into a physical relationship with the characters, provoking an almost palpable fascination for these hybrid bodies. Where the potential reality, desire and dreams are is difficult to say.