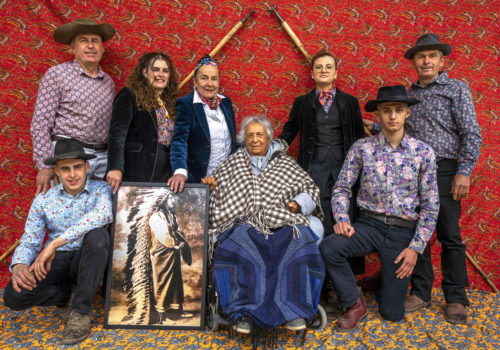 Professor of French in the Belfast ghettos in 1973, author of a thesis in English on the influence of war on children’s behavior, Patrick Frilet began his career as a journalist as a correspondent for the newspaper Liberation in Northern Ireland. Soon after, in 1975, he joined the SIPA PRESS agency as a photographer. The reportages followed one another and he specialized in guerrillas, liberation struggles, and violent social conflicts: the guerrillas in Sri Lanka, the entry of the Communists into Laos, the Berber revolt in Morocco, the Polisario Front, the Palestinian factions, Nicaragua, El Salvador, the Maoist guerrillas in the Philippines, the autonomous movements in Europe. Five years later, becoming a freelance photographer, Patrick Frilet devoted himself to magazine stories that sometimes required several months of work: the sidewalks of Manila on child prostitution, the gangs of Los Angeles, the Navajo Indians, the Afar tribes of the Horn of Africa were published by the biggest international magazines. In 1988, he was even the first Western photographer to enter North Korea. And in 1990, he took part in the creation of the first training in photojournalism within the EMI-CFD in Paris, which he ran until 2000. In 1995, he published an educational book entitled “Photojournalism, the guide” , with photographer Yan Morvan, which is still a reference work today. He moved to the gates of the Camargue in 2009 and in 2018 created a “photovoyageurs.com” photo-travel structure. It is with his fiber as a photojournalist and as a “transmitter” that he now takes photographers to improve their skills in areas he has covered. He takes them to Papua, North Korea, Burma, Ladakh, the ethnic groups of the Indian continent, the black minorities and the Sioux in the USA, Colombia, Northern Ireland and obviously in Camargue …. stays that inaugurate a new way of traveling: Patrick Frilet provides photo travelers  with the benefit of his scouting, his knowledge of the field and his networks.

His true history with the traditions of the Camargue dates back to 1981 when he was sent by the magazine Jours de France to cover the goodbye to El Cordobès during the Feria de Nîmes. He then discovered the Camargue race, met and photographed Christian Chomel, the greatest raseteur of all time, and published numerous reports both in France and abroad. In addition to wanting to share his passions for human travel and photography, he decided through exhibitions and especially through this book on Les Dynasties de Camargue to support and make known a whole people who live and fight to defend their traditions.

This book of photographs taken in field studios by Patrick Frilet, photoreporter, with the backdrop of Provençal fabric hangings explores the universe of the Camargue with its traditions and dynasties of manadiers, raseteurs and Arlesiennes.

Gil Lorfèvre, author and journalist, presents with these images all the actors who bring this bullfighting universe to life between Gard, Hérault, Vaucluse and Bouche du Rhône. Whether they come from the great family lines, the base of this people of bulls, or herders, raseteurs, breeders, craftsmen … Whether they are from the old generation with their stories and their desires to transmit or from the new wave with its vision for the future and its hopes for succession, they form this unique and fascinating territory.

The book is for sale on the platform: https://achevedimprimer.com/collections/frontpage/products/les-dynasties-de-camargue