Patrick Brown Wins the 2019 FotoEvidence Book Award with World Press Photo for “No Place On Earth”. 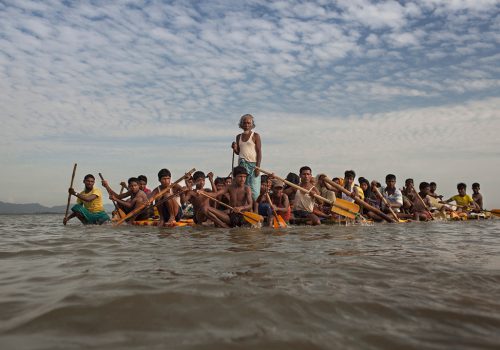 Svetlana Bachevanova, publisher of FotoEvidence, announced that photojournalist Patrick Brown will receive the 2019 FotoEvidence Book Award with World Press Photo and that a book of his work, No Place On Earth will be published by FotoEvidence this year and released in Amsterdam.

Photographer Patrick Brown has since 2017 documented the world’s fastest growing refugee crisis and one of the most rapid human outflows in recent history. Risking death at sea or on foot, more than 700,000 Rohingya fled the destruction of their homes and persecution in the northern Rakhine State of Myanmar for neighboring Bangladesh. Arriving at the makeshift camps, most refugees reported harrowingly consistent stories of murder and rape, all of which testify to a deliberate campaign of eradication. “No Place On Earth” provides an intimate portrait of the survivors of the recent persecution and their bleak conditions in overcrowded refugee camps.

The Rohingya are a predominantly Muslim minority group in Rakhine State, western Myanmar. They number around one million people, laws passed in the 1980s effectively deprived them of Myanmar citizenship. Violence erupted in Myanmar on 25 August after a faction of Rohingya militants attacked police posts, killing 12 members of the Myanmar security forces. Myanmar authorities, in places supported by groups of Buddhists, launched a crackdown, attacking Rohingya villages and burning houses. In late August 2017, I starting hearing reports from friends and colleagues in Bangladesh that Rohingya Muslims were flooding across the border with horrific stories perpetrated by the Myanmar military and vigilantes.
The UN High Commissioner for Human Rights has called the crackdown in Rakhine State, Burma, “a textbook example of ethnic cleansing”. There is nothing clean about Ethnic cleansing – up close and on the ground, it’s murder, it’s rape, it’s people being slaughtered in the most systematic and barbaric way. It’s people. While euphemisms and diplomatic language can obscure the true horror inflicted by oppressive regimes, photography cuts through all the cold clinical terminology. Through photographs we’re forced to confront the cruel reality of what ethnic cleansing really looks like.
Although I’ve worked in tough environments before, nothing could have prepared me for the raw misery I saw and heard over the following months: orphan children carrying their younger siblings through flooded paddy fields; wounded men and women who had walked for 10 days with nothing more than their shirts on their backs. Soon the hundreds of desperate people became thousands, and then tens of thousands, then hundreds of thousands. Amid the crush of humanity and gathering monsoon rains, they tried to make shelters with anything that could give them some cover.
Today, the refugee camp in Cox’s Bazar is the world’s largest – a city of nearly a million people, more densely populated than Manhattan and the size of Copenhagen. Trapped on the edge of a foreign country and rejected by their ancestral homeland, the Rohingya have nothing there but their will to survive and whatever support we provide for them. Their needs are total: for clean drinking water, schools, health care, jobs. But most of all, a safe and dignified place to call home.

The hardcover book No Place On Earth will contain approximately 95 color photographs with associated texts and interviews by Jason Motlagh and Matthew Smith. Design SMITH, Allon Kaye, Gemma. It will be released in April at the 2019 World Press Photo festival in Amsterdam. The New York premiere of the book is May 30th at the Bronx Documentary Center.

Australian photographer Patrick Brown has lived and worked since made Thailand his base for nearly 20 years, devoting himself to documenting critical issues across the Asia region often ignored by the mainstream media. One of his major project on the illegal trade in endangered animals won a World Press Photo Award in 2004 and a multimedia award from POYi in 2008. Continuing to work on the subject, his book ‘Trading to Extinction’ was nominated in the 10 best photo documentary books of 2014 by AmericanPhoto.

Patrick is the recipient of the 2019 FotoEvidence Book Award and World Press Photo Award 2018, 3P Photographer Award, Days Japan Award, Picture Of The Year Award, and NPPA’s Best of Photojournalism Award for his work. His work has been exhibited at the International Centre of Photography in New York, the Metropolitan Museum of Photography in Tokyo, and Visa pour l’Image in France.

Patrick has been represented by Panos Pictures since 2003.

The annual FotoEvidence Book Award with World Press Photo recognizes a documentary photographer whose project demonstrates courage and commitment in addressing a violation of human rights, a significant injustice or an assault on human dignity. The selected project will be published as part of a series of FotoEvidence books dedicated to long-form projects of documentary photographers working in the humanistic tradition. The FotoEvidence Book Award with World Press Photo winner and two selected finalists will be exhibited during the 2019 World Press Photo Exhibition in conjunction with the launch of the book in Amsterdam.

The book No Place on Earth by Patrick brown is available at the FotoEvidence bookstore online:  http://fotoevidence.com/book/38/hard-copy