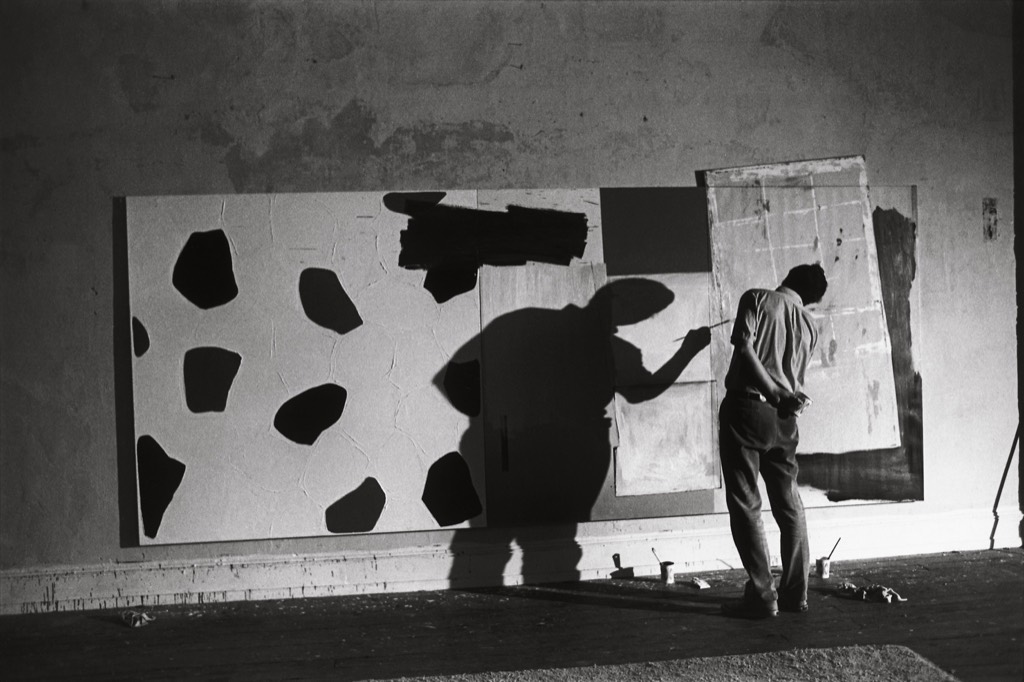 As a follow up to the exhibition at Point du Jour, and coinciding with the French translation of the photographer’s final, cult work, La Fotografia (1973), the Fondation Cartier-Bresson holds an exhibition of Ugo Mulas’s work, co-curated with Ugo Mulas Archives and the Cherbourg art center and publishing house.

A major figure of twentieth-century Italian photography, Ugo Mulas remains little known in France. Self-taught, he became interested in the Milan art scene and in the city itself before he became a professional photographer with several European assignments, most notably as the official photographer of the Venice Biennale, starting in 1954. His departure for New York ten years later marked a turning point in his career. Ugo Mulas met some of the great pop painters: Andy Warhol, Jasper Johns, Roy Lichtenstein, and Frank Stella whom he immortalized in their ateliers, taking care to show the context, the milieu in which each artist evolved, and the chosen point of view. This series of portraits was published as a book, New York, the New Art Scene, in 1967. It constitutes a veritable photographic narrative in which friendship bonds and affection matter as much as the creative act.

The Parisian exhibition opens with a shot of Alexander Calder who, as a close friend of the photographer, holds a special place in his work. Marcel Duchamp looks quite fetching in the photograph of his famous chess match with the nude Eve Babitz or posing next to the Large Glass. These photographs emanate a necessarily autobiographical and subjective dimension.

Upon his return from New York, Ugo Mulas became interested in the rising Italian neo-avant-garde, with such figures as Lucio Fontana and Michelangelo Pistoletto. Between 1968 and 1972, he created the series Verifications, considered as the foundation of conceptual photography. Starting with an homage to Nièpce, the series explores photographic materials and processes, and opens a whole field of experimentation: from tinting, chemistry, development, completion stages, to enlargement. The project aims at returning to the specificity of the surface, understanding the task of the photographer, and analyzing the speculative operations—thus giving rise to visual abstract thinking.

Centre Pompidou recently featured Verifications as part of the exhibition Qu’est-ce que la photographie? This is a proof, if we ever needed one, of the continued relevance of this approach.

* The first 20 readers to send us an email at info@loeildelaphotographie.com with their name and address will obtain free invitations to the exhibition.