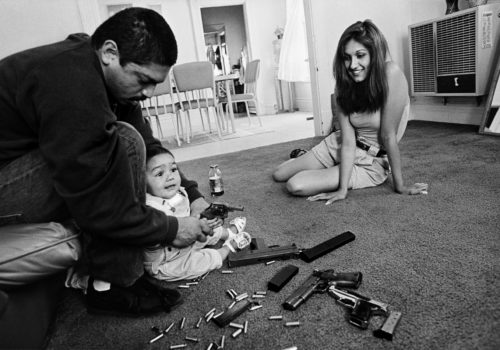 Gregory Bojorquez
In December of 2011 while walking on Sunset Blvd, near the intersection of Vine Street, Bojorquez was literally caught in the crossfire of a dramatic shoot out between a lone gunman and LAPD. As Bojorquez instinctively snapped pictures, police shot the gunman dead in the street. One innocent bystander was also shot and later died in the hospital. Bojorquez’ photographs were carried by hundreds of newspapers around the world, but have never before been available to view as a sequence of fine art prints.
This series of photographs form the backbone of “.45 Point Blank,” which is a retrospective of Bojorquez work beginning in 1992 through 2011. The gritty, street-level work features the kind of grimy glamour that is Bojorquez’ calling card. From Boyle Heights to Beverly Hills, Bojorquez ability to capture the essence of such a disparate group of subcultures signals a major photographic tour de force.

A native of East Los Angeles, Bojorquez cut his teeth shooting for the local alternative newspaper, L.A. Weekly. He also made a name for himself amongst the city’s celebrity set with his unique approach to shooting hip hop icons and sports stars. But his personal work was always a priority – Bojorquez never went anywhere without his camera and in 2009 his work was featured in a collection called “The Sun Rises in the East” at the downtown Los Angeles art gallery 01.

Joseph Rodriguez
Rodriguez’s photography intimately documents the life of people who live at the fringes of society: families who live on the wrong side of the law, prostitutes in Mexico, jail inmates in Zambia and pentecostal pilgrims in Romania. Isolation, migration, prostitution and religiousness – people are always at the focus of Rodriguez’s work: “I am a humanist, people are important to me. The way I take photographs may not be hip, but they are relevant.”
As a teenager in the 60s in Brooklyn, Rodriguez was jailed for burglary and drug dealing. When at the age of 20 he was released from prison for the second time, he decided to change his life fundamentally. He rejected drugs and criminality and embraced a new passion – photography. “The camera saved my life. Photography became my addiction and replaced the other one.” He took photographs of the life he knew. Rodriguez’s images have since appeared in renowned magazines and newspapers all over the world such as The New York Times, Newsweek, Der Spiegel, Stern, GEO and National Geographicto name but a few. Links