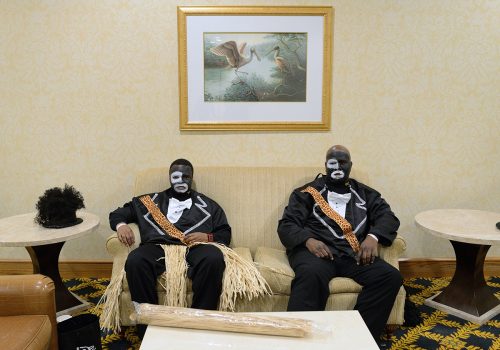 The Dominique Fiat Gallery presents at Paris Photo, “CHAM, a work in progress, 2010…” a solo exhibition by Paris based Italian photographer Nicola Lo Calzo. Since 2010, Lo Calzo has traversed Atlantic coastal areas to research living memories of the slave trade and colonial slavery. Using documentary images alongside still lifes and more formal portraits, complemented by elaborate captions and in-depth contextual information, Lo Calzo tries to capture a complex and intangible phenomenon, to reveal an alternative mapping of the world, and thus, a counter cartography of the resistance. Combining a longitudinal and multi-layered approach, this ambitious, still on-going project, documents, for the first time, some practices of the African diaspora in America, Cuba, Haîti, Suriname, French Guyana, Sicily, the Caribbean, and West Africa. In his artist’s statement, Lo Calzo asks, “How is it possible that the world organized the social, political, and moral consensus around the slave trade for four centuries, and how is it possible to erase this founding phenomenon of modernity from the collective memory of Western countries and even from textbooks? Have the memories of slavery, discarded by history, survived to this day and, if so, in what forms and in what places? How do these memories, repressed by some and preserved by others, define our everyday relationships, our perception, and the place of everyone in society?”

Lo Calzo has exhibited his photographs widely in museums, art centers and festivals, most notably the Afriques Capitales in Lille, the Macaal in Marakesh, the Musee des Confluences in Lyon, the National Alinari Museum of Photography in Florence, and the Tropen Museum in Amsterdam. His work may be found in public and private collections such as the Alinari Archives in Florence, the Bibliothèque Nationale de France, in Paris, the Pinacoteca Civica in Monza, and the Tropen Museum in Amsterdam.  Kehrer and André Frère have published three of Lo Calzo’s books: Regla (2017), Obia (2015), and Inside Niger (2012). He is also a contributor to the international press, including, Internazionale, Le Monde, The New York Times, The New Yorker, and The Wall Street Journal. In 2018 Lo Calzo received the Cnap Grant and a nomination for the Prix Elysée 2019-2020 for the Cham project.