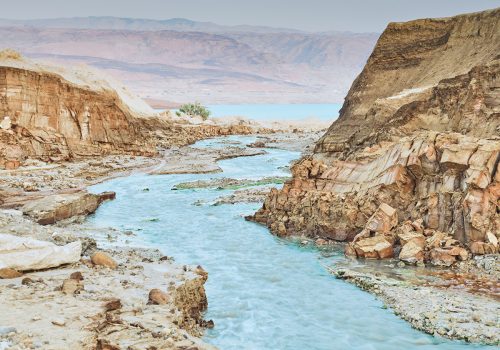 […] And also, alongside these workers, there’s this other image with biblical contours that no one else would be able to see after the closure—manu militari—of the Grand Palais, caught up in the shock of the attacks. A hard won photograph of a landscape, taken by venturing into a forbidden zone at the Israel-Jordan border. Originally, that of a dream Jordan, hurtling itself into the Dead Sea on these much-coveted banks—a picture postcard, nothing more.

A timeless image from very far away, that would nevertheless subtly foreshadow the strife to come between Jews, Christians, and Arabs. Today, the waters of Jordan are drying up and the Dead Sea is slowly emptying out, like a symbol of life disappearing. Once again, I behold this permanence of the beauty of the landscape, of these veiled faces, in the midst of this disaster that I was able to capture. And I am speechless.