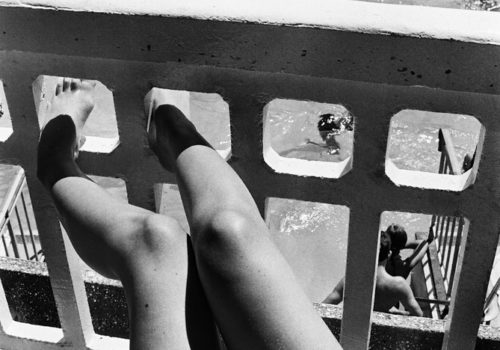 Gil Rigoulet captured scenes of the famous Molitor swimming pool in Paris in 1985 and then again thirty years later. He is showing a selection of his photographs at the Bar de Molitor until  February 29th and it is a great opportunity to discover his unique black and white images of Piscine Molitor in 1985 alongside a Polaroid-Impossible Project series that he produced after the pool reopened in May 2014.

“I wanted to connect present-day Molitor with life there 30 years earlier, and reveal the magic of the site, which is listed as an historical monument.

In 1985 I produced two black and white series at Piscine Molitor, the iconic Art Deco swimming pool built in ocean liner style in the chic 16th arrondissement of Paris. It was here that the bikini debuted in 1945 and it was a topless bathing hotspot in the 1980s.

These photographs are part of an ongoing project I have worked on for the past thirty years on the theme of “Body and Water” at swimming pools around the world.

Piscine Molitor closed in 1989 and there is no other body of photographic work that depicts it like this. My images portray an almost mythical place where a joyful, insubordinate generation of young people would meet up. I would hold my camera at water level, free to photograph what I wanted, no one bothered, no authorisations were required. No one took any notice. Young women nonchalantly rolled their swimsuits up to their hips, or took off their bikini top to get an even tan. They would swim topless, unabashed. You would have a smoke after a swim, your fingers still wet. Us boys were asked to rub sun cream into the girls’ backs. We obeyed, of course, hooked on the vanilla fragrance of the Tahitian monoi oil.

It was a time when you’d go to the swimming pool to have fun. To flirt, to chat, to daydream.

Times have changed: the pool reopened as part of five-star hotel in May 2014 but it has kept its 1930s blue and yellow colour scheme.

I returned to dive back into the pool’s atmosphere, this time using Impossible Project’s colour film. I wanted to unite these two universes, despite the thirty years that have gone by, and reveal the magic of the site, the sensuality that comes from water and the ocean liner architecture.

The film was a way of reaching back to the 1980s, with the washed-out Polaroid colours of that era, giving a vintage yet somehow contemporary feel.”