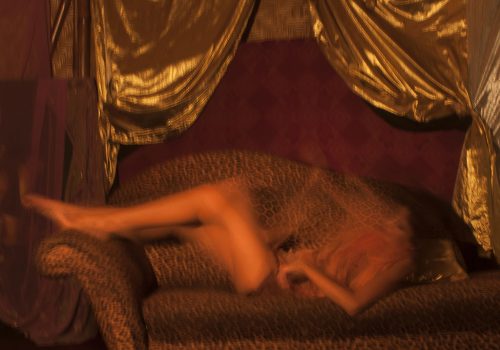 In the southern hemisphere of our planet Earth there exist a fairly common specie of migratory bird who propagates so quickly that only a ruse of nature safeguards from an horrendous nightmare end. Year after year they darken the heavens above the Occidental Africa continent where they gather for their passage across the ocean to another continent. Only one-tenth of them complete the crossing. Ninety per cent falling dead from exhaustion into the middle of the sea at the point where Science assume that millions of years ago the great land mass broke apart into two separate continents.

The birds begin to circle frantically seeking their land where it no longer exist. Their instinct preserved over millions of years guiding them to their death by exhaustion.

Only the most insensitive reach the shore.

This series is not exactly a series, rather a mix of moments shared with women in different places around the world, women who make a living from dance and their bodies. Women who fly in search of freedom, their destiny, who fight close to the ground and to the movement of their body, in a continuous flow that makes them go around the world. A new species of migratory bird that fly across seas and oceans before arriving on dry land; some stay on an island, perhaps in Spain, in Ibiza for an indefinite period, others travel as far as Reno, in the USA, in a Journey that takes them to and from Madrid, to a street that can only be named disillusion.

Siwah is also or perhaps above all, the story of a vision of a traveling woman who is a migratory bird, flying in search of a land that no longer exists, turning into the bodies and customs of other women. In this case, women who half work and half live in a clandestine arabic dance venue, similar to a brothel. A meeting place, and also a luxury sex shop on an island, because, as we know, islands are good stopping off points for birds on a short flight; another half hidden meeting place. In these two places, and in many others (Reno, Mexico City…) there are various encounters, meetings between people, between glances, coincidences meetings on a journey.

Ways of looking, living and viewing the world and to search for how to follow the flight of these women, photographer and dancers came together at a point in time. Just to recharge and recuperate , take some photographs, dance some eternal dances and continue on the journey that takes us back to the same place: a destination within ourselves where only the most insensitive arrive.