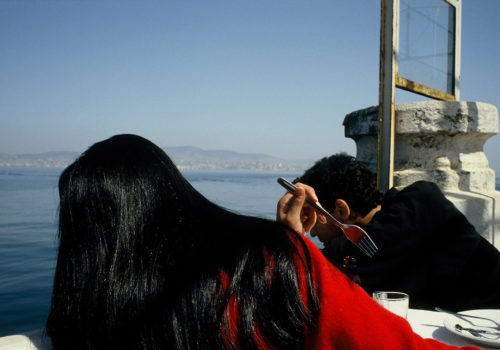 A photo received for Valentine’s Day. Its author: Olivier Garros. A memory: his portfolio in PHOTO when I entered the magazine a century ago. An exchange of emails later, the original text of the time and a few images of this wonderful colourist Olivier Garros!

The text is from Yves Bourde, one of the amazing characters who found his way trough the life of PHOTO.

The revenge of an advertising convict

A mad lover of color: this is how the young photographer Olivier Garros, twenty-eight, grand-nephew of aviator Roland Garros and son of actor Maurice Teynac, defines himself. And he explains: “I am fascinated by pure color. Do not think that there is any pretension in these words. Color has a life of its own, it is alive; without exaggerating, I have a curious, almost physical attraction to it. ”

This profession, he has been practicing it for three years, after having been a messenger for an American agency in Paris, the “Fooke, Cone and Belding”, then assistant to the production manager, which allowed him to learn all the “tricks” in  advertising, from design to printing, including layout and production. In this profession, however, he is given little freedom. He knows full well that he is not the only one to speak out against the lack of trust that “clients” have in photographers. “It’s disheartening, demoralizing, to be taken for a photo machine.” His work is exclusively advertising and is shared between clients such as Lancôme, Payot, Dior and Le Bourget. “I would love to do editorial fashion as well, but I have very little time. And when I have some, I take pictures for myself that the agency“ Fotogram ”distributes. What do they represent? Color, colors, again and again, photographed using very little equipment: a Lunasix cell, a Nikon body, a 24, an 85, a 180 mm, a 55 mm Micro-Nikkor; and exclusively the ‘Ektachrome X, bought and developed in the same lab, which gives results as good as the Kodachrome. You be judge by the way. ”