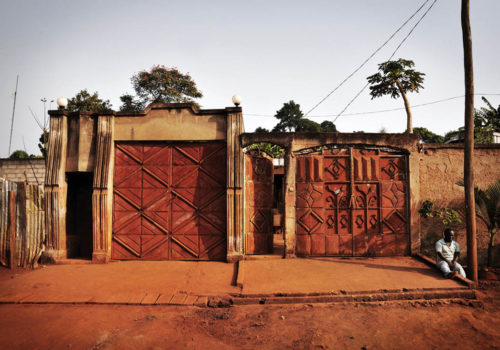 Morgante tells the story of individuals linked by a common denominator: to be dwarfs. “Morgante”, nicknamed the Giant from the poem by Luigi Pulci, was the most famous of all five dwarfs in the court of Medicis in Florence. He was by then represented as “monstrum”.

Through the paintings of Bronzino and the sculptures by Giambologna, the dwarf Morgante becomes an idea, an archetype, the magnet through which the “human family” gazes at diversity throughout the centuries. Through this literary and iconographic correspondance, Central Africa becomes for the photographer an opportunity to deliver a never before seen gallery of portraits on the universe of small people, a category of people often marginalized in some African countries. Often linked to witchcraft, they live in a state of semi clandestinity, confronted by all sorts of psychological violence. The photographer chose to shoot the subjects in their privacy, at their homes, in their workplace or on the streets: In the images of Lo Calzo, Fidel, Kwedi, Babel, they are no longuer victims of their size. On the contrary, they are protagonists of the represented scene as in their private life. Lo Calzo stages a representation of diversity as a value and self acceptation: every photographed subject looks into the camera to seek the view of the observer. He masters the scene, player and interpreter of himself. In some african societies polarized between concepts of normal and abnormal, good and bad, tradition and modernity, “Morgante” appears as an invitation to brake this array of “monstrum” and embark into a complete recognition of diversity.

The difference or physical handicap becomes a presumed attribute for supernatural powers. Nicola Lo Calzo has succeded in entering into the closed and hidden world of the small people, gaining their confidence and helping them to discover it for themselves. The portraits of Fidel, Genevieve, Raissa, Kwedi, Paul Claver, Nelly…, become an act of resistance against the mockery that they are subjected to, and that represents, according to their own accounts, the first obstacle, an isolating and discouraging factor”. Laura Serani

Nicola Lo Calzo is an Italian photographer. His photography can be enrolled in a documentary approach on the border between journalism and art photography, with an accorded attention to minorities and human rights. He has notably exposed in Rencontre d’Arles Festival in 2009, in the Musée de Confluences in Lyon in 2010 and in the 2011 ImageSingulières Festival in Sète.

A large exhibition is currently being featured in Florence, in the Musée National Alinari de la Photographie, along with a catalogue including a preface by Laura Serani.

The exhibition Morgante, is presented by Afrique en vie and Afrique in visu
From July 5 through July 10, 2011
Place Patrat, Arles