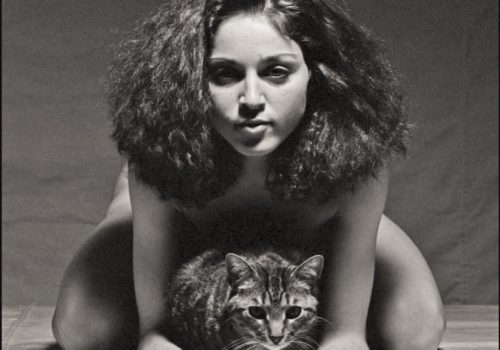 After the huge success of American photographer Martin HM Schreiber’s Madonna Nudes in the 1990s, the new edition Madonna Nudes II, published this month by ACC Editions, features many recently discovered and never-before published photos of the pop star Madonna, along with a selection of the best images published in Madonna Nudes 1979 edition.

I was a struggling young photographer in my second year of teaching a course entitled Photographing the Nude at the New School/Parsons in New York City. The school supplied the models.

On 12 February 1979, a quiet, shy young woman walked in to my studio for the first time, the nude model for my photography class that evening. She said she was a dancer. Her name was Madonna Ciccone.

Madonna was not only a welcome relief from the average, lumpy but sweet art class model, she was also one of the loveliest models I ever photographed.

We spent a short time together and then parted ways. She was seeking her future and had to keep moving. At the time, I don’t recall her saying anything about singing, that came later. A few years passed and I saw her riding a bicycle down Houston Street in New York and I waved. She stopped and we exchanged hellos. That was the last time I spoke to her.

In 1985, while working on my third book, I saw Madonna’s face on the cover of Interview magazine. I had no idea of her stardom and was amazed and delighted for her. I also distinctly remember asking my then girlfriend if she thought anyone would be interested in my images of Madonna. She said “No.”

In September 1985, Playboy magazine published four of my photographs of Madonna. They were nude studies, devoid of any prurient interests, having nothing to do with sex or exploitation, and that is how they should be viewed, along with their sister shots in this book.

This book is a celebration of the human form, a dedication to an innocent, determined young woman and to all figure models. It is a tribute to Madonna and anyone like her who aspires and, through ambition, hard work and perseverance, achieves their goal.

Martin Hugo Maximilian Schreiber is a Czech-American photographer born in 1946 in Prague and now based in New York, USA.