Nandita Raman – Do Not Forget Me 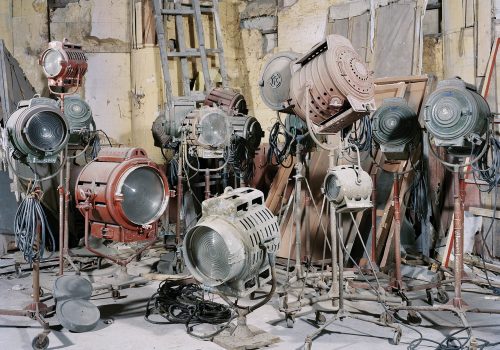 Do Not Forget Me borrows its title from a short story by Alexander Kluge (Cinema Stories, 2007) about a German actor’s desire to be loved and remembered forever. The muted color works in Film Studio touch on the objects that produced lasting memories: cameras draped in faded fabrics, well-worn ladders— shrouded remnants of a once teeming industry left in the dust. Raman’s photographs of these objects, tools, and spaces that at one time rendered the imaginary visible, serve as mnemonic devices that spark anecdotes and recollections of the history of Indian cinema.

In Manik-da’s Camera, there appears to be three floating cameras enveloped in a haze achieved by using the image multiplier filter from the floating camera’s kit. These filters were once popular for depicting fantastical dream sequences in Indian films. Satyajit Ray, the famous filmmaker, was known amongst his friends and the industry as Manik-da. The camera he shot on was forever known as that camera. As with past photographic series, Raman applies her almost decade-long exploration of temporality, impermanence, and the unreliability of memory to Indian cinematic history.

“When I went back to Kolkata in 2013 a few years after photographing the cinema halls there, it was evident to trace the footsteps of film backwards from the cinema hall to film studio. The old filmmaking gear was stored in corners of the shooting floors and in dark rooms shrouded under blankets. When this equipment was uncovered, I sensed the spirit of experimentation and whim of post independence (50s and 70s). It is this spirit that I pursued while photographing these machines of optics and sound.“ — Nandita Raman

At Technician’s Studio founded by the legendary cinematographer Ramananda Sengupta, we see where Satyajit Ray’s Pather Panchali and fellow Bengali filmmaker, Ritwik Ghatak’s films were laced with sound, the console covered in a thin layer of dust and a towel casually draped on the back of the editor’s chair. In another image, Manik-da’s chair quietly sits in the exterior grounds of Image India, its white wrappings fluttering in the breeze.

The color photographs from Raman’s Film Studio (2014) compliment her earlier study Cinema Play House (2006-2009), wherein she traveled through India creating a series of black-and-white, formally composed photographs depicting the country’s slowly disappearing single-screen theatres. Raman, whose family owned one such theater in Varanasi, focused her lens on the architectural anomalies and human touch that set these spaces apart from larger multiplex theaters that threaten their existence.

Nandita Raman – Do Not Forget Me