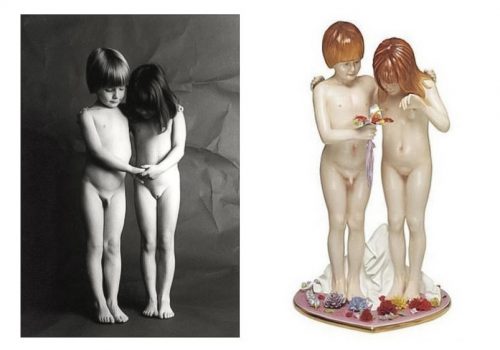 “Naked”: the Paris Court of Appeal considers that the sculpture by Jeff Koons is a forgery of a photograph by Jean-François Bauret.

The name of Jeff Koons appears again in a French court decision. In recent years, in fact, the American artist has been the subject of several convictions for counterfeiting, and the decision of the Paris Court of Appeal of December 17, 2019 only prolongs a judicial past unfavorable to the artist.

In this case, the Court addressed the case of the porcelain sculpture entitled “Naked”, depicting two naked children held by the shoulder. Created in 1988, the work was to be exhibited at the Center Pompidou in 2014 as part of the retrospective devoted to Jeff Koons before being damaged during its transport. The heirs of photographer Jean-François Bauret have nonetheless sued Jeff Koons, his company who manages the production, exhibition and promotion of his works, and the Pompidou Center in forgery of a photograph taken by Bauret in 1970, entitled “Children “And representing two naked children in a pose similar to that of the children of” Naked “. Withdrawn from the exhibition, the work, on the other hand, appeared on the various supports of the exhibition sold to the public.

In its judgment of March 9, 2017, the Tribunal de Grande Instance de Paris recognized the infringing nature of Koons’ work, despite the differences due to the specificities of the supports (sculpture and photography), rejecting the artist’s arguments freedom of expression and the art of appropriation, an artistic movement that consists of creating a work based on pre-existing works. The Court of Appeal then had to carry out a proportionality check between, on the one hand, the protection of the copyright of the photographer, and, on the other hand, the freedom of expression which guarantees artists a total freedom of creation. The search for a balance between these two artists’ rights has been on the legal agenda for several years.

In its decision of December 17, 2019, the Court confirmed the judgment and condemned the company J. Koons and the museum for counterfeiting the photographic work on the grounds that the sculpture incorporates ‘the combination of characteristics which reveal the originality of the photograph’ Children ‘of Jean-François Bauret’ and thus infringes copyright, a right considered fundamental. Jeff Koons LLC is ordered to pay the heirs 10,000 euros in compensation for the property damage and 10,000 euros for the violation of moral rights. The Centre Pompidou is jointly liable for 10% of these sums. This judgment is part of a French jurisprudential tradition which tends to sanctify copyright by giving it priority as soon as another fundamental right, such as freedom of expression, threatens to hamper it.

The Court of Cassation had however reminded in 2015, in the resounding case Peter Klasen opposing the latter to a photographer who accused him of having inserted some of his works in his creations without his consent, that  the artistic freedom of the artist should be taken into account before deciding on the existence of an infringement, the judges having to concretely justify why one of the two rights should prevail over the other. By relying on Article 10 of the European Convention on Human Rights which guarantees freedom of expression, the Court of Cassation thus restored the balance between these two fundamental rights.

In the current state of the law, the only exceptions to the rule of copyright reside, under Article L.122-5 of the   Intellectual Property Code, in pastiche, parody and caricature. Koons’s work obviously does not fall into one of these categories. An interesting proposition would be to admit that freedom of expression can prevail if the “borrowed” work is sufficiently known and recognizable for the public to be able to identify its appropriation by the “second” artist.

The search for a balance between these two fundamental rights, copyright and freedom of expression, still has many years to go.

Julie Raignault, lawyer at the Court

Gramond & Associés is a business law firm. It notably supports art market players in securing their projects and defending their interests. www.gramond-associes.com