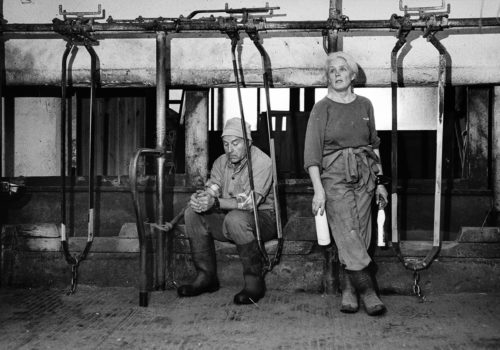 The reportage Ferme n°4233 – Un long adieu was photographed by Tomas Wüthrich from April 1999 to April 2000. Overwhelmed by the demands of agricultural policy and market developments, his parents ceased to operate their farm in Kerzers in Switzerland. Their son, a photographer, documented this painful episode. His images bear witness to the profound upheavals in agriculture and acquired universal significance.

“The farm with the official number 4233 was located in Kerzers, on the banks of the Grosse Moos in the Seeland of Friborg. It belonged to my parents Hans and Ruth Wüthrich. For nearly thirty years, they raised dairy cows and cultivated arable land. The farm had not been profitable for years. In April 2000, they had to give up with a heavy heart.

I accompanied them with my camera during their last year of operation and, in addition to the daily work, I captured certain decisive moments: the signing of the contract with the new tenant, the departure of the cows, the last big cleaning of the empty stable. ”

Tomas Wüthrich was born in Berne in 1972. After an apprenticeship as cabinetmaker, he worked for a while in social work environment. In 1999 he began training as a press photographer at the MAZ Journalism School in Lucerne, before being hired by the Berner Zeitung. Since 2007 he has been working as a freelance photographer and collaborates with newspapers and magazines such as Geo, Das Magazin, NZZ am Sonntag, Schweizer Familie.

At the same time, he is carrying out long-term projects, like his numerous reports on the Penan populations on the island of Borneo, which culminated in the book Doomed Paradise (Scheidegger & Spiess, 2019). Tomas Wüthrich has received numerous awards, including the Swiss Press Award and the Swiss Photo Award vfg selection. He currently lives in Liebistorf (FR).

The book presents, on 176 pages, a selection of 73 photographs

in black and white in a carefully arranged order, designed by Atlas Studio, as was the case for the photo book Doomed Paradise – The Last Penan in the Borneo Rainforest, published in 2019.

On sale on the online store of the Musée gruérien (www.musee-gruerien.ch).

Autographed and signed copies can be ordered directly from www.tomaswuethrich.ch/shop