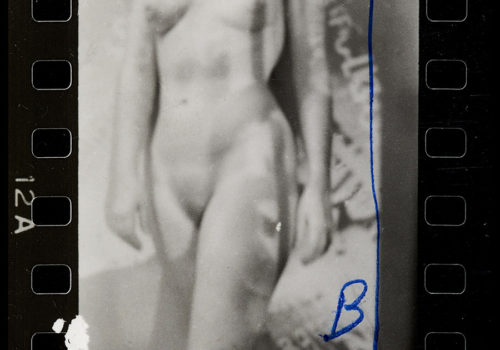 The exhibition presents the 24 prints gathered in the portfolio of Acquaviva editions, from the two series of “Photopoems” by Jean-François Bory produced in 1965 and 1966, with his accomplices Myriam Meyer and Michèle Petitdant.

These prints were made in August 2021 from the original contact sheets, retaining the artist’s annotations.

“The idea of ​​making a portfolio of four copies of these two series of” Photopoèmes “by Jean-François Bory came to me when I discovered with amazement the original contact sheets of these two historical actions. The annotations made with colored pencils by Jean-François, their lack of initial aesthetic intention, all this added in my opinion to their radiant beauty and simplicity, a sort of poetic and intimate side of the photographic actions of the “24 hours in the life of a woman” that Michel Journiac realized ten years later and published with their common publisher, Arthur Hubschmid.

It is funny to note that now 83 years old, Jean-François Bory remains this poet-artist-writer-photographer-filmmaker living in quasi-clandestinity in France, while his archives are now kept at the Beinecke Library (Yale University), next to those of Marinetti, Gertrude Stein or Henri Chopin, with whom he shares a reception “outside the walls”. So in the USA (with the publication in 1968 of “Once again”, an anthology on concrete poetry published in NY), but also in Germany, in Italy – he is one of the rare French avant-garde to have been collected. by Francesco Conz – as well as in England, such as Henri Chopin, Claude Pélieu or Jean-Louis Brau.

In the sixties, Bory developed his experimental streak in London, with a series of publications and exhibitions at Gallery Ten. It was in this same gallery that he decided, one day in 1965, to try to project his poems “Spot”, “La Peste” or “Saga” on the body of his friend at the time, Myriam Meyer. If previously poetry was done “in the mouth”, from now on, it will be inscribed on the skin. There is in this session all the force of a poetry of desire, in flesh and movement, where the text mutates into a 3D device, according to the curves of the model, and well before its clonification. Unlike Maurice Lemaître who, the previous year, required visitors to draw on his own body as a creative medium, Bory, like a modern Gustav Klimt, was more concerned with his models than with his self-portrait, penetrating through intrusion via its own texts into the very body of the consenting model.

The page is then abandoned to its sad fate of post-Mallarmean shipwreck, as evidenced by the second series of photopoems “As for the book”, produced with Michèle Petitdant. This session will take place in Paris, of course, but in a bookshop-gallery called La Librarie Anglaise … ”

The 24 chosen photographs were printed in inkjet printing in 40 x 30 cm format, on Hahnemühle 285g pearl paper, and were signed and numbered by Jean-François Bory

The portfolio was printed in 4 copies

At the same time, a complete set of 24 photographs was printed, sold individually, numbered A.P. 1/1