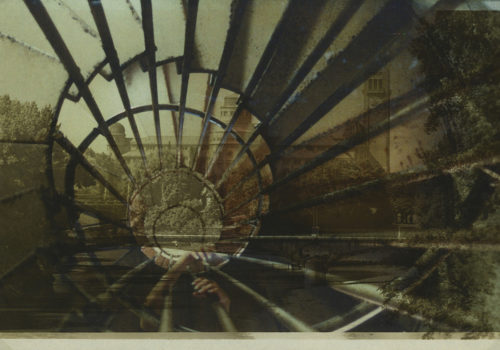 Emi Anrakuji is known for taking obscured and often close-up images of herself (all but her eyes) in mundane surroundings with evocative atmospheres. This exhibition features over 30 color-pigment self-portraits that Anrakuji meticulously printed on vintage picture postcards (in Japanese, ehagaki ) collected by her grandfather at the turn of the last century. The grandfather, a wine importer in Tokyo, frequently traveled to Europe and brought back these postcards, a popular novelty among collectors especially from the 1890s to the 1910s. According to Anrakuji’s family lore, a box of the well-preserved old postcards miraculously survived the 1923 earthquake and the WWII air raids in 1945. On both occasions, the fire burned down the city of Tokyo almost entirely, including her grandfather’s shop. Therefore, these postcards became a family treasure passed down through the generations.

In the early 2000s, Anrakuji was struck by these images/objects that cross lines of geography, economy, and politics revealing a complex history of visual culture. In them, she felt a strong connection to her grandfather who passed away well before she was born. For the most part, Anrakuji kept these works private, except for permitting some of them to be published as a book as well as creating color prints from the originals. For the first time, this exhibition presents the original works with unreplaceable value. Each work demonstrates a lyrical and sometimes provocative interplay between Anrakuji’s own shadowy figure and the miniature landscapes, buildings, ruins, and artifacts portrayed a century before by commercial photographers. The wide-ranging origins of images from Italy, the Netherlands, France, Great Britain, Belgium, the United States, Japan, China, and Egypt evoke nostalgia for the steamship journeys of the golden age. With these pieces, Anrakuji transcends time and space, triumphantly turning her family saga into an immortal palimpsest.

Emi Anrakuji (b.1963) studied oil painting at Musashino University of Art and Music. In the late 80s she was diagnosed with cerebral cancer which caused a severe degradation of her eyesight forcing her to quit painting. During this period, she taught herself photography using the camera lens as a replacement for her eyes. Since 2001 her work has been exhibited extensively across the United States, Japan, Korea, the United Kingdom, Spain, and France, including the Daegu Photo Biennale in South Korea in 2008 and PHotoEspaña in 2017. Her work has been featured in several notable publications including FOAM, The New Yorker, and British Journal of Photography. She has also published six monographs—HMMT? (2005), Anrakuji (2006), e-hagaki (2006), and IPY (2008), MISHO (2017) and Balloon Position (2019). Balloon Position was shortlisted for Paris-Photo—Aperture Foundation Photobook Awards and awarded by Photo City Sagamihara Festival in 2020.