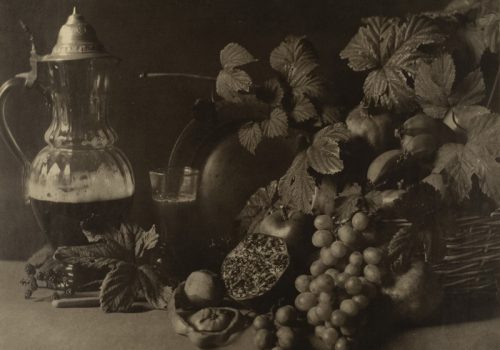 This exhibition brings together two generations of work by famed photographers from the early 20thCentury. A mother and daughter who each operated commercial photography studios and excelled in the art of photography while exhibiting their award-winning photographic prints in international salon exhibitions. Their work was last presented together in the group exhibition “REDISCOVERY, Canadian Women Photographers 1841-1941”, curated by Laura Jones. This exhibition opened at London Regional Art Gallery on May 13, 1983 and was also presented in four additional galleries including the Art Gallery of Ontario in 1984.

This exhibition highlights examples of the different methods of their photographic practice which spans from the 1890s through the 1940s. Minna Keene, née Bergman, lived in Britain, South Africa, and Canada. She emigrated to the United Kingdom between 1870-1880 and married Caleb Keene, a noted painter and decorator. Minna was a member of the London Salon of Photography and in 1908 was the first woman to be admitted as a Fellow to the Royal Photographic Society. She was also asked to join the Linked Ring in the final year of that illustrious circle.

Minna’s first photographic work was of plant life, for which she made exposures during different stages of growth. Later, she made a successful series of ornithological photographs that illustrated English textbooks which remained in use over several decades. In 1903 Minna emigrated to Cape Town, South Africa, and made studies of Boer life while operating an active photography studio and raising two children. She exhibited her photographs of Boer life at the Lyceum Club, London, in April 1907. In 1910 she exhibited in the Fifty-fifth Annual Exhibition of the Royal Photographic Society of Great Britain, and again each year until 1929. In 1911 Minna’s photograph of her daughter Violet entitled Pomegranates, was awarded Picture of the Year at the London Photographic Salon.

In late 1913 the Keene family moved to Canada, first settling in Montréal, and then in Toronto. Minna was practising as a professional photographic portraitist and was commissioned by the Canadian Pacific Railway to photograph the Rockies in 1914 and 1915. In 1920 she opened a studio in Toronto and then relocated to Oakville in 1922.

In 1926, Minna was featured in a Maclean’s magazine article that mentions the highlights of her career and enthuses about her being a “Home lover!”. In the 1930s Minna continued to exhibit internationally and was assisted in the studio by her daughter Violet who eventually succeeded her, and also became a photographer in demand at the Eaton’s photography studio in Toronto on College Street from 1933-1948. While serving as the manager of the Eaton’s photography studio, Violet operated her own portrait studio in Oakville and throughout her career photographed major figures of her time including Aldous Huxley, George Bernard Shaw, Amelia Earhart, W.B Yeats, Vere Ponsonby; 9th Earl of Bessborough, and the Canadian Governor General.