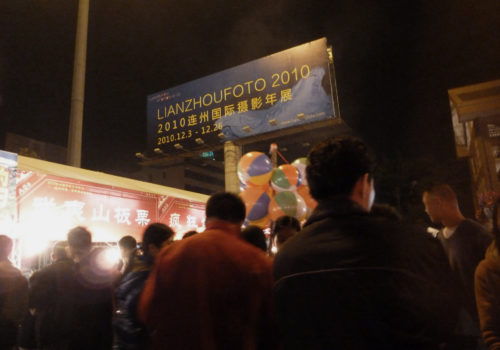 “Is the world real?” This is the theme of this year’s sixth annual photo festival in … Lianzhou, a small city of 200,000 inhabitants surrounded by countryside in the Guangdong region, 60 kilometers from Guanzhou. “Is the world real”, a very unorthodox question in this materialistic world whose philosophical dialect’s principal theme is “the concrete analysis of a concrete situation”. (Lenin, “What is to be done”, 1905). However the general tendency of this Festival is the introduction of the intimate into the photographic works of our Chinese counterparts. Nevertheless, and this is very interesting, the presence of Lu Houmin, Mao Zedong’s official photographer from 1961 to 1964 offers a dated yet often joyous, if strictly orthodox, photographic view of outdated propaganda. Similarly incorporated, albeit discretely, into the content but not the form are Liu Xiangchen’s pictures of China after Mao. Getting back to intimacy, this thematic has become prevalent since the demise of the unbounding wave of creativity and omnipresence of documentary photography, two tendencies signifying a progressive liberation of soul. The intimate is not shown here as a kind of demand, like a rebellious plight, but as something natural, for example in the work of this young couple, Zhang Jungang and Li Ji, (www. Zhangiunjungang.com, blog : www.zhangjungang.com/blog) whose photographs are anything but surprising but whose meaning and whose ferocity is in their angle. Their exhibition is simply called “Everything Here” and we witness there times of emotions shared by couples, objects, country sides, and meetings… You Li ([email protected]; erisyo.cn) isn’t seen directly, in contradiction with her family and no longer enjoying city life, she finally decides to “find inner truth” and leaves to find silence in the Chinese northern country. Reading these pictures, we immediately feel the presence of the young photographer, her desire to discover the world she voluntarily observed with a minimalist eye, as if it would facilitate the end to her sadness. Madi Zhu called her exhibition “Parallel World”. He says “The more I pursue reality, the more I understand it does not exist virtually. Thus I seemingly understand why I have always consisted on photo shooting. Reality is just the reality in your understanding. As a photographer and an individual person, my photos will appear in front of your eyes as my understanding of the world.” Mingyi Luo, a story, he is a shop-owner who one day discovered a book by William Klein, a shock that would transform him into a photographer… “these photos of mine were shot in 1991 to 1999 and the shooting venue was the famous commercial streets in Chengdu, Sichuan province, Qingnian Road and Chunxi Road. I have a short businessman experience, so I am familiar to the people on the two roads. At that time, I almost communicated with them everyday which allowed me to shoot them again and again with different methods. When they and I were all in a certain state, I had the strong feeling that we held the same mind and then I put up my camera at them. I knew I was not standing by, nor an invader, because we were dancers in the same arena. When common minds met tacitly, the moment curdled forever”. With these few examples, intimacy is approached through different angles, but the result is always convincing. This search for intimate expression shows how photographers are part of Chinese society’s escape from a unique mindset and can now display their works.
Michel Philippot