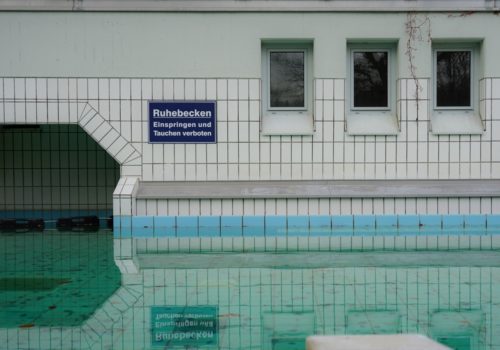 Waiting for the summer. World in Reflection – Gauting Outdoor Pool

Michael Nguyen had the opportunity to photograph in the winter of 2020 before the first snowfall in the summer pool Gauting. He entered a fascinating world of water reflections. 2020 has been a turbulent year. But also a quiet year for some. Like swimming pools and lakes, which in Summer usually are heavily frequented otherwise. But it’s also a chance for them to be calm finally. Their water is more clear, more peaceful. In turn, they give trees, birds, houses, and us a once-in-a-lifetime opportunity to stop and reflect. To see the world both at its most chaotic and most serene. And to see ourselves: World in Reflection – Surprisingly wondrous and spectacular is Michael Nguyens view of reflections in the water of the summer pool.

The Gauting summer pool with a 50- meter sports pool officially opened on June 25, 1966. For the 1972 Munich Olympics, the Gauting training pool was fully completed with heated changing rooms, swimming channel and heating system – largely financed by the National Olympic Committee. At the time, it served as a training facility for athletes housed in the surrounding area. Mark Spitz (“Mark, the Shark”), the former US world-class swimmer trained in the Gauting summer pool and won seven gold medals at the 1972 Summer Olympics in Munich. In the vicinity of today’s open-air bath, there was a public bath in the second century AD. In the spa, which was excavated in 1936, residents and travelers could wash themselves.

“Waiting for the summer“ is part of the ongoing series „By the roadside“ by Michael Nguyen. If we walk with our eyes open, we can see interesting, beautiful, and also ugly things along the road every day. And if we walk with not only with our eyes but also with our heart and mind open, you will discover a world that would otherwise remain closed to us. Sometimes spectacular. Sometimes ordinary but surprisingly miraculous. Be it a look into a garage, a view onto the riverbank, the bus stop before the chewing gum vendor machine, or just a footprint somebody has left on the opposite side of the pavement. Michael Nguyen accompanies us on little journeys through places in Bavaria, and elsewhere, to discover what the random walk leads us to.