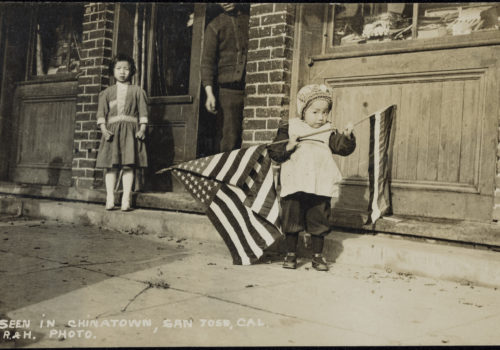 Featuring more than 300 works drawn from the Leonard A. Lauder Postcard Archive, a promised gift to the Museum of Fine Arts, Boston (MFA), Real Photo Postcards: Pictures from a Changing Nation takes an in-depth look at the innovative early-20th-century medium that enabled both professional and amateur photographers to capture everyday life in U.S. towns big and small. The photographs on these cards, which range from the dramatic and tragic to the inexplicable and funny, show this moment in history with striking immediacy—revealing truths about a country experiencing rapid industrialization, mass immigration, technological change, and social and economic uncertainty. The exhibition is on view from March 12 through July 25, 2022 in the Herb Ritts Gallery and Clementine Brown Gallery. It is accompanied by an illustrated volume, Real Photo Postcards: Pictures from a Changing Nation, produced by MFA Publications and authored by Lynda Klich and Benjamin Weiss, the MFA’s Leonard A. Lauder Senior Curator of Visual Culture, with contributions by Eric Moskowitz, Jeff. L Rosenheim, Annie Rudd, Christopher B. Steiner and Anna Tome.

In 1903, at the height of the worldwide craze for postcards, the Eastman Kodak Company unveiled a new product: the postcard camera. The device exposed a postcard-sized negative that could print directly onto a blank card, capturing scenes in extraordinary detail. Portable and easy to use, the camera heralded a new way of making postcards. Suddenly almost anyone could make photo postcards, as a hobby or as a business. Other companies quickly followed in Kodak’s wake, and soon photographic postcards joined the billions upon billions of printed cards in circulation before World War II.

“Real photo postcards bring us back to the exciting early years of photojournalism. The new flexibility and mobility of this medium created citizen photographers who captured life on the ground around them. These cards particularly excite me because we learn from them both the grand historical narrative and the smaller events that made up the daily lives of those who participated in that history,” said Leonard A. Lauder.

Real photo postcards, as such photographic cards are called today, caught aspects of the world that their commercially published cousins never could. Big postcard publishers tended to play it safe, issuing sets that showed celebrated sites from towns across the U.S. like town halls, historic sites and post offices. But the photographers who walked the streets or set up temporary studios worked fast and cheap. They could take a risk on a scene that might appeal to only a few, or record a moment that would otherwise have been lost to posterity. As the Victorian formality of earlier photography fell away, shop interiors, constructions sites, train wrecks and people being silly all began to appear on real photo postcards—capturing everyday life on film like never before.

Real Photo Postcards: Pictures from a Changing Nation is organized thematically, with groupings of postcards centered around various events and activities that captivated both professional and amateur photographers at the time—from public festivities and organized sports to people at work in professions ranging from telephone operators to farmers. Many of the cards convey local spot news—fires, floods, explosions, political rallies, strikes and parades—presaging the digital journalism of our own age. The exhibition also features a wide array of postcard portraits, which were inexpensive and affordable to people from most walks of life. Popular categories of postcard portraits included workers posing with the tools of their trade or people posing with studio props or backgrounds, sitting on paper moons or “flying” in a fake airplane or hot-air balloon. Collectively, these portraits offer a rare view of a modern America in the making—one constructed by the people, for themselves.

“The postcards in this exhibition are precious, intricately detailed windows into life a century ago. In exploring the Lauder Archive, we selected and arranged the cards with the hope of conveying a measure of the intimacy and serendipity that might come from walking the streets of a town of that time,” said Weiss.

“Some of those cards reveal their history in great detail, while others are resolutely mute about who made them and why. That is one of the pleasures of working with postcards, and one of the things that makes the Lauder Archive such an inexhaustible mine of stories and mysteries,” added Klich.

Funds for this exhibition provided by the American Art Foundation, Leonard A. Lauder, President.

The single most comprehensive collection of postcards in the world, the Leonard A. Lauder Postcard Archive was promised to the MFA in 2010, migrating from New York to Boston in annual installments. The Archive, which contains more than 110,000 postcards, spans the history of the medium, from its beginnings as a humble pre-paid postal card in 1869, through the enormous postcard craze of the 1890s and 1900s, to those produced in World War II, and includes some cards from the Cold War era and beyond. Among its particular strengths are artists’ cards of the decades on either side of the turn of the 20th century; advertising cards; so-called mechanical cards, which have pull tabs and other moving parts; cards associated with politics and propaganda; and cards of ethnographic subjects, including large groups of cards from Africa. The collection also includes an extensive group of cards—nearly 15,000—issued by the Detroit Publishing Company; it is a near complete collection of cards by this important publisher of American view cards.