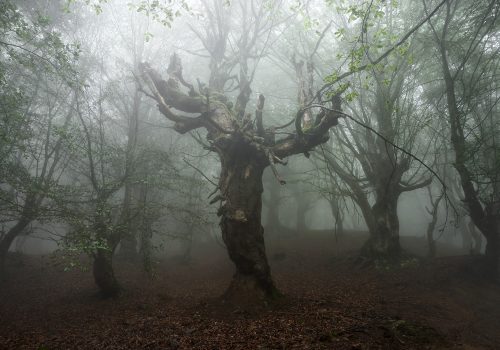 Forgotten Conversation – These images belong to Caspian Hyrcanian mixed forests located in the north of Iran. On 5 July 2019, the Hyrcanian Forests were inscribed as a UNESCO World Heritage Site. During last year, I went deep into these jungles once or twice per week and took shots. I started this project in September 2018, coincides with starting my new lifestyle.

Seeing and experiencing mechanical life, people who are influenced by false advertisements and scramble to earn more money to purchase or sell in anyways. Since I was involved in such activities, there was an empty space in my head that I had filled unconsciously with complexity. The initial idea came from this complexity and quitting urban life. I tried to find a way to avoid such issues.

When I changed my lifestyle and left my life in the city I had a chance to spend a lot of time between the Hirkani’s forests that was near my new place. I could make a deep relationship with the nature that I have never had before, it influenced my way and my routine life and the way that I wanted to show the nature.

Deep relevance between human and nature is a forgotten issue. besides all of the beauties and unforgettable scenes that I saw, it had an irreversible effect on my attitudes to life, I felt a kind of sadness with the loneliness that came from the spirit of the forests during the photography. Like a beautiful story but saddening.

At first, I wanted to do this for my own sake or a personal project to have a new experience. but after a while, I realized that in the next couple of decades they will be destroyed. Who knows! Maybe even next year one of the trees in the pictures will be disappeared. So I decided to show people what I see and what I comprehend.

My name is Mehrdad Kanani, I’m 30 from Iran. I study Graphic Design and these days I spend my time on photography and producing music.

Precisely last year, I decided to leave my job along with the whole things I got barely from mechanized life and capitalism system in Tehran and move to a small village in the north of Iran for experiencing a new and adventuresome lifestyle.