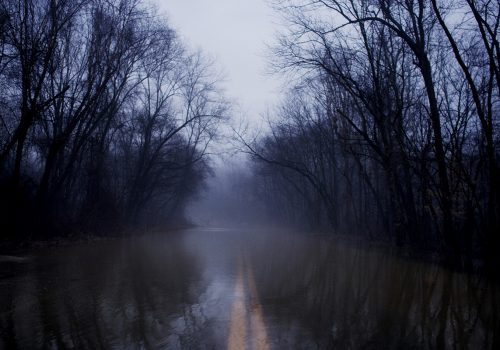 The Invisible Yoke is a four-part series of photographic essays spanning nearly 15 years. Making photographs as I came of age, I felt and feared a deepening divide in America. Now as I raise my children in Charlottesville, Virginia, I have witnessed firsthand, in my own community, the hatred and division along lines of race and class that persist in my country.

Moving forward, I intend to photograph as prolifically as possible leading up to the next presidential elections, covering a wide swath of the American landscape and populace that I have not yet documented. While making new photographs I intend to publicly install existing photographs from the series alongside poems as a means of finding or creating a connective tissue through my country during this divided time. If the work does nothing else, I hope it piques curiosity, and increases empathy.

This year marks the fourth time I have been a finalist for the W. Eugene Smith Fund. It is always an honor to be considered for the grant, as many of my photographic influences have received support in the past. Receiving the Leonian Finalist Award this year is a much-needed encouragement to continue with my project when I may otherwise feel defeated or exhausted by the task at hand.

Matt Eich is a photographic essayist working on long-form projects related to memory, family, community, and the American condition.

Matt’s work has received numerous recognitions, including PDN’s 30 Emerging Photographers to Watch, the Joop Swart Masterclass, the F25 Award for Concerned Photography, POYi’s Community Awareness Award. His projects have received grant support from an Aaron Siskind Fellowship, a VMFA Fellowship and two Getty Images Grants for Editorial Photography. His work has been exhibited in 20 solo shows, in addition to numerous festivals and group exhibitions. Matt’s prints and books are held in the permanent collections of The Portland Art Museum, the Museum of Fine Arts Houston, The New York Public Library, Chrysler Museum of Art and others. Matt was an Artist-in-Residence at Light Work in 2013, and at a Robert Rauschenberg Residency in 2019.

Eich holds a BS in photojournalism from Ohio University and an MFA in Photography from Hartford Art School’s International Limited-Residency Program. He is the author of three monographs, Carry Me Ohio (Sturm & Drang, 2016), I Love You, I’m Leaving, (ceiba editions, 2017), and Sin & Salvation in Baptist Town (Sturm & Drang, 2018). He has two forthcoming monographs with Sturm & Drang scheduled between 2019 and 2021. Matt is an Assistant Professor of Photojournalism at Corcoran School of Art and Design in Washington, D.C. Eich continues to acct commissions, and resides in Charlottesville, Virginia with his family.

Mayan beekeepers believe that the native stingless ­­Meliponine bees were a gift from the god Ah Muzen Cab and a link to the spirit world. For centuries they’ve provided enough honey to make the Yucatan peninsula one of the world’s largest producers. But in the past few years, the hives have been disappearing and the dwindling supply of honey has been contaminated by pesticides.

In 2011, the Mexican government began offering subsidies to farmers willing to grow soy, allowing GMO soybeans into the region. The farmers who seized that opportunity were overwhelmingly from the Mennonite communities who could afford the necessary amount of land and machinery. Due to its effect on the bees and their honey as well as increasing health problems in the region, in 2015, the Supreme Court banned GMO soy yet the primarily Mennonite farmers continue to cultivate it with impunity and are purchasing and deforesting portions of the Yucatan’s rainforest at an alarming rate to make room for their crops and endangering the health of Mennonites and Mayans alike. The rainforest, which is the second largest in Latin America after The Amazon has garnered the attention of the new Mexican president, Obrador who’s government, in the past year has begun to crack down on deforestation, sending a clear message. With an average of 8 children per family many Mennonites are looking towards greener pastures.

Seizing on the recent peace accord in Colombia, Mennonites from both the Yucatan and Northern Mexico where an ensuing water crisis has caused many to leave have already established colonies and are growing crops. With the highest number of internally displaced people in the world it is estimated that up to 20 million acres of land was taken from its rightful owners during the Colombian conflict, including the area in which Mennonites are resettling.

My work on the Mennonites in the Yucatan growing GMO soy which has devastated the Mayan beekeepers brought me to this story of migration and environmental destruction. Most look at the Mennonites as an orthodox religious group, trying to maintain a way of life. My goal is not to paint good guys and bad guys but rather to bring awareness to both communities about genetically modified crops and deforestation and the affects that has on the environment. I feel it’s important to look at environmental stories in a societal and cultural context, rather than focusing solely on science which can sometimes feel distant from their own realities.

“Being a finalist of the Eugene Smith Grant is one of the highest honors I have achieved so far in my career. I’m well aware of the difficulties the jury must have faced with all of the outstanding entries and I’m so grateful they have recognized and awarded this complex and very important project, which has direct human and environmental implications.”

Nadia Shira Cohen is a freelance photographer, writer and videographer contributing to the New York Times, National Geographic, Harpers and many international publications as well as working with non-profit organizations. She works frequently in Latin America as well as countries such as Haiti, Kazakhstan, Congo, Rwanda, and Kosovo, focusing on human rights, reproductive rights, environmental issues, disaster, revolution, and migration. Nadia was born in Boston in 1977. At 15 she received her first camera, in the same moment she was diagnosed with cancer. She began to make self-portraits to document the physical and emotional evolution of being sick as well as to photograph her fellow oncology patients at Mass General Hospital in Boston. A University of Vermont graduate, she began her career in New York City as a photographer for the Associated Press. She became proficient in the photography business, working as a photography agent at Sipa Press and later as the Director of North America for VII Photo Agency. Nadia moved to Rome in 2007 where she continues to be based. She is a World Press Photo winner and her work has been exhibited internationally in The United States, Russia, Belgium, Spain, Mexico, Italy, and Peru. She is an IWMF Fellow and a Pulitzer Center on Crisis Reporting grant recipient for her work on gold mining in Romania.