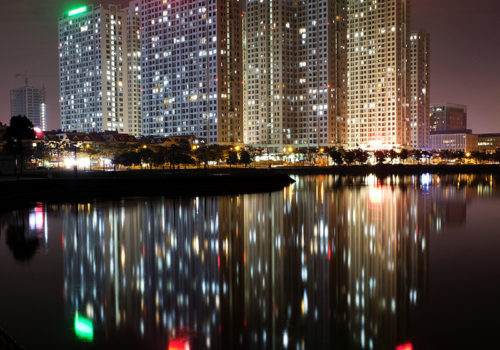 Belgian photographer’s debut photobook takes us on a journey through a Hanoi of a neon-lit haze, crisp shadows, and illuminated windows punctuating the night sky.

“Hanoi is shedding its skin. So what to make of its spirit?”, asked Wouter Vanhees, a Belgian photographer based in Hanoi since 2015.

Every Wednesday night around 10:43 p.m., when “the stars of work, family, and personal time align”, Vanhees looks for the answer by taking nocturnal scooter trips to different neighborhoods in the city, carrying his camera as an armor. He has been documenting Hanoi’s large-scale estates with apartment complexes and luxurious villas catering to its burgeoning middle class, some already inhabited, some unfinished, laying bare the scaffolding.

The resulting photobook Hà Nội, Wednesday, 10:43 p.m. is a collaborative effort between him and Matca, a leading platform for contemporary photography in Vietnam. The photobook is printed on fine art paper and has a clean design that pairs well with the tightly composed pictures.

Vanhees’ urban nightscapes are eye-catching, but they are not only so. These aspiringly modern and brutally anonymous forms might not compose the first image of Hanoi that comes to mind, one that often carries the romantic undertone of a bygone era. With the locations obscured, perhaps what is captured is not a particular building but a promise, a collective yearning, or a default symbol of future prosperity.

“I want to understand this city. There’s order in its chaos. There’s stillness in its noise. There are so many shades to its darkness. And it’s changing so fast. Houses, alleys, and entire wards disappear, with towers, streets, and new urban areas taking their place. It’s hard to come to grips with this transformation, not knowing what was in the first place, let alone what is to come”, shares Vanhees.

Wouter Vanhees (1978) is a Belgian photographer based in Hanoi since 2015. He practices street and documentary photography, as living in Hanoi sparked an interest in the rapid rate of urbanization of Vietnamese cities and the social implications this creates. Wouter’s work has been featured at OpenWalls Arles 2020, Angkor Photo Festival and workshops, The Washington Post, VICE Asia, and Urbanautica, among others.

Published by Matca in cooperation with Lao Dong Publishing House