Masterpieces from the Walther Collection No. 3: “Mask of a Parallel World” 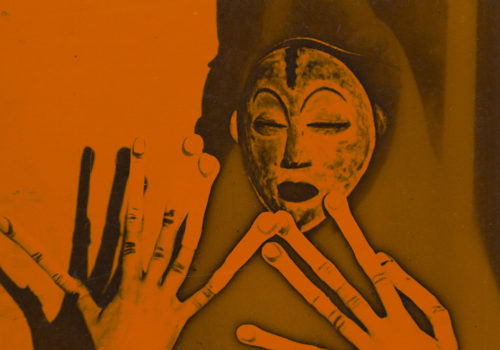 (3/5) Throughout the exhibition which takes place at the Jeu de Paume in Paris with the exceptional Walther collection bequeathed to Moma, L’Œil de la Photographie focuses on one masterpiece in particular. Today, a mask from Gabon.

Picture of an enchanting creature, whose silhouette we can hardly perceive with alien hands and long, slender fingers wearing a ritual wooden mask.

No more was needed to inspire Maurice Tabard, then aged 39, who was making his way discreetly among the surrealist multitude emerging at this time. A fervent admirer of Man Ray, whose example he dared to follow in the use of the technical process of solarization, he was also fascinated by the ancestral cultures and animist cults of West Africa.

Thus he joined a certain group of Parisian artists who, from the first years of the twentieth century, in particular the trio Matisse, Picasso, Vlaminck, were interested in African masks. This is a so-called “mukudj” mask, typical of the Punu people of Gabon, supposed to represent a woman from the sculptor’s tribe. The latter, when he cut this mask, had to do it absolutely outside the village as the ritual dictates and therefore, with only in mind the image of the model chosen, sometimes his own wife.

This “essay” for a film on Voodoo cult was produced with a view to an exhibition in 1937, perhaps the famous universal exhibition which then took place in Paris, a major meeting place for modern artists, and which notably presented Guernica by Picasso.

Voodoo is this shadow religion, banned in the colonies of black American slaves that became the symbol of the underground struggle and the proof of a certain syncretism, it was highly interesting for the surrealists for its supernatural dimension.

But voodoo also crystallizes the western fears of the moment, looking to the elsewhere and the bizarre. So much so that in the middle of World War II, in 1943, a film by Franco-American Jacques Tourneur was released in theaters in the United States and called” I walked with a zombie”. The script is as follows: a nurse comes to treat a young woman who seems bewitched as a result of voodoo rites, gradually learning that she is in fact a zombie, or the slave of a wizard.

Himself then maybe, yesterday or today, the slave of a white owner?