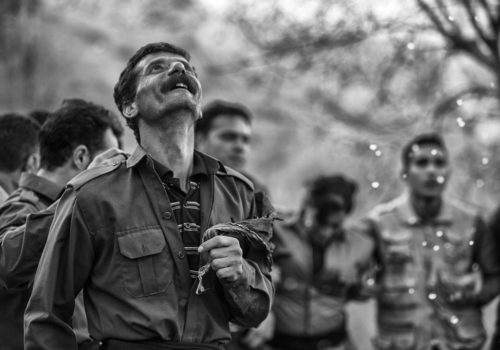 “Rise above the ruins, dance between the bullets “ This is the apt title that Maryam Ashrafi gave to her more than welcome book, essential to our duty to remember.

Take a good look at the elegant, noble and simple beauty of this young woman close to tears on the cover of the book.

Not to forget the fight of the Kurds and in particular of the women soldiers who from Kobane to Mount Sinjar have marked with their courage, too often paid with their lives for a fierce resistance, since 2014, to the advance of the Islamic State.

Faithful to her Iranian origins, the young photographer has always kept alive in her “the bite of exile” from Tehran to London and Paris. Younger sister and worthy heir to her great elders, the Catherine Leroys, Françoise Demulder, Christine Spengler, Lizzie Sadin, pioneers of very committed photojournalism, Maryam followed in the footsteps of her father, a militant from the 1st hour who was supposed to leave “to go mountaineering ”in the mountains of a shattered Kurdistan from Iraq, to ​​Syria all the way to the Turkish border. To live, as closely as possible, the daily life of the women fighters, to follow them in the destroyed cities and to see through their eyes and their words unfold “a geography of mourning” she confided during a moving interview with Allan Kaval, major reporter of the “World”

Maryam Ashrafi never caricatures and never uses stereotype  too aware that “violence also made its way to her”, just as the “representation of cities in ruins has become a sub-genre of reportage photography.”

Because all her photos are imbued with a primary quality: that of an aesthetic sense that never becomes overwhelmed by the emotional overload of a decisive moment, always perceived and framed modestly. There is something about her of James Nachtwey, her professional reference, she shares with him the feeling: that the clarity and strength of a photographer’s convictions make the power and balance of framing crying out for truth.

Clouded with infinite sadness, the gaze of the very young little girl, already a Madonna of the future, follows the portrait of the grandmother still inhabited by the pain of suffering endured. Death lurks in the rubble of devastated villages, real graves or stelae that speak of past battles.

From the pile of rocket drums already used emerges the blondness, the smile and the laughing eyes, the provocative touch of a doll that like a survivor “invites you to dance between the bullets.” Like the most basic act of bravery to keep faith in the survival of a Kurdish people shattered but still a bulwark of the West – also the victim of a willed betrayal, on October 7, 2019, by a certain Donald Trump, ordering the withdrawal of the main body of American troops.

Far from any militant folklore, the force of the collected images of Maryam, since her first report in 2012 in Souleymanieh testifies to the vitality of equal rights between men and women, exemplary in its universal vocation.

The smiles accompany the outstretched hands in the dances between women combatants and their counterparts, communicating with the intimate conviction of being indispensable to each other. A soldier scares a flock of doves, moment of grace, “fly away the doves, fly the doves .. would have said Mahmoud Darwich in the hope for peace so wished for.

“To photograph is to put the head, the eye and the heart on the same line of sight” wrote Henri Cartier-Bresson. Each page of this work is a new proof of the saying.

All in modesty, humility and solidarity.