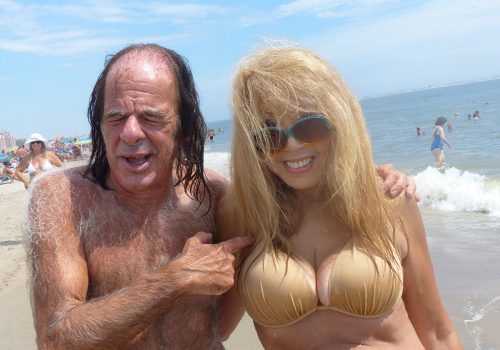 The exhibition of Marcia Grostein at the National Arts Club in New York just ended,  we didn’t want to pass on it.

Marcia Grostein’s Brighton Beach Bliss: The World as it Should Be – stands as a testament of harmonious coexistence between diverse populations. Comprised of intimate yet unabashed beachgoer portraits, the series reveals a rare intermingling of races, religions, relationships, and body types that characterizes the ocean-side community of Brighton Beach.

The unique history of Brighton Beach paved the way for the diversity that Grostein documents within her photographs. In the mid-1970s, the neighborhood became a popular place for Soviet immigrants to settle – particularly for Russian and Ukrainian Jews. Since the 1990s, however, the ethnic demographics of Brighton Beach have begun shifting rapidly. The area, while still home to many Jewish residents, has also become a nexus for Hispanic and Central Asian Muslim immigrants, among others. Today, roughly seventy-five percent of Brighton Beach’s inhabitants were born in countries other than the United States.

Grostein’s raw shots – taken over the course of 7 years– offer viewers a glimpse of these multigenerational migrations, which have merged into a single, uniquely globalized locale. While the beachgoers are immersed in their own activities, they also partake in the broader activity of community-building, simply by way of their proximity to one another. Vignettes – characterized by mutual respect between the photographer and protagonists – depict interactions that are harmonious, warm, or meditative, with all inhabitants seeking a distinct form of rejuvenation by the sea shore. Adolescents make memories that will last well into adulthood and the aging carry on with habits formed over a lifetime. While the individual photos stand as strong images of inter-personal respect and self-care, the series as a whole conflates distinct fields of anthropological investigation – asking us to consider how diverse biologies, cultures, and linguistics can together enact an unified present.

Grostein portrays this amazingly diverse microcosm with an air of pride and hope. Through her careful documentation of these heartening realities, it is suggested that all inclusive environments have the potential for world-wide replication.

Indeed, while discussing the series the artist has made the following point: “This place where all forms and genres of cultural manifestations coexist say so much about the progress we made over centuries, and presents an impressive opposition to the current political scenario.”

In the Brighton Beach Bliss series perfection is not defined by a single perfectly proportioned body; rather, Grostein asks us to find beauty that can be found in the human gaze, and in a mutual desire to act together within natural and built environments. The inhabitants of Brighton Beach demonstrate what it means to slough social, political, and cultural stigmas in favor of respect and understanding.

Overall, Marcia Grostein’s Brighton Beach Bliss series allows for our immersion in a utopia where multiple faiths, sects, races, and appearances are all welcome.

Marcia Grostein is a Brazilian born American artist whose practice includes sculpture, painting, video, photography, portable art/jewelry and mixed media. Pieces from her prolific oeuvre can be found at The Metropolitan Museum of Art, MoMA/PS1, MASP Museum of Art of São Paulo, MAM Museum of Rio de Janeiro, the Hara Museum of Contemporary Art in Tokyo among others, and many private collections.