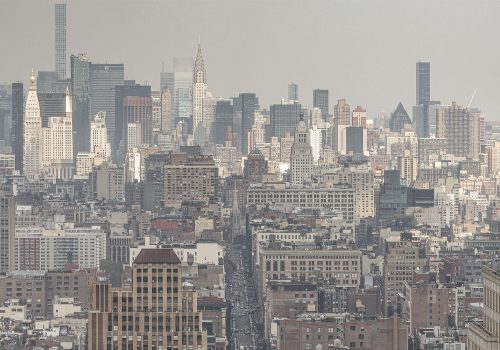 ClampArt presents New York Unseen, an exhibition of new photographs of city buildings by artist Marc Yankus. This is the Yankus’ sixth solo show at the gallery.

In his continuing investigation into the architecture of New York City, Marc Yankus’ newest photographs present the stalwart buildings of the city isolated from people, traffic, and extraneous information.  Celebrating the majesty of more than a century of urban architecture, New York Unseen incorporates many of the city’s most-recognizable structures coupled with those in unpretentious neighborhood settings.

Panoramic shots of such iconic subjects as the Metropolitan Museum of Art and the main branch of the New York Public Library share Yankus’ vision with majestic residences including The Dakota and One Fifth Avenue and more homely subjects like a fence in Greenpoint, Brooklyn, and a streetscape in the West Village. Some of the work is shot head-on with precise symmetry and other views are dramatic, with oblique, aerial perspectives, providing views of famous buildings and familiar city streets from a decidedly unfamiliar vantage point. By eliminating movement and distraction, the artist distills his subjects down to their pure essence, revealing their souls and recognizing them as witnesses to the change of time.

“In my portraits of New York’s buildings, I aim to mute some of the visual noise that can distract from their essential beauty, allowing the viewer to see the entirety of each building and in the process helping them see the city anew,” stated Yankus. “They are captive subjects, frozen in time, with history etched on their surfaces and inside the buildings themselves.”

The exhibition at ClampArt coincides with a solo show of Marc Yankus’ work at Grand Central Terminal. Organized by MTA Arts and Design, the exhibition is titled Landmark City, and will be on display in the lower level Dining Concourse through July 2020.

Marc Yankus’ fine art and publishing experience spans a period of more than forty years. His work has been included in exhibitions at the Brooklyn Museum and the South Street Seaport Museum, New York; the George Eastman House, Rochester, New York; and the Library of Congress, Washington, D.C. His work is represented in the permanent collections of the Museum of Fine Arts, Houston; the New-York Historical Society, New York; and the Library of Congress, Prints and Photographs Division, Washington, D.C. His artwork has graced the covers of books by Salman Rushdie, Philip Roth, and Alan Hollinghurst, among many others. His images have also been used for theatrical posters for such acclaimed Broadway shows as “Jane Eyre;” August Wilson’s “Ma Rainey’s Black Bottom;” and John Patrick Shanley’s Pulitzer Prize-winning play, “Doubt.”