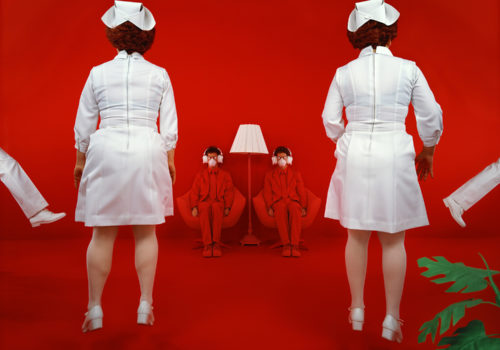 The Multimedia Art Museum, Moscow presents an exhibition by American artist Sandy Skoglund, a key representative of the genre of tableau photography — ‘staged’ or ‘constructed’ photography. Back in the early 1980s, long before the advent of Photoshop, Skoglund presented the world with images of extraordinary surreal installations that instantly brought her international renown.

Sandy Skoglund was born in 1946 in North Weymouth, Massachusetts. The artist’s family often moved around, and in the 1960’s they lived for a short time near Anaheim, California, the site of the original Disneyland Theme Park. Later Skoglund often said that the bright colours of California greatly influenced her own perception of colour. From 1964 to 1968 she studied studio art and art history at Smith College in Northampton, Massachusetts, and dreamed of a career as a fashion designer or cartoonist. Under the Junior Year Abroad Program, Skoglund spent a year at the Sorbonne and the École du Louvre in Paris, where she was fascinated by avant-garde cinema. In 1969 she began graduate school at the University of Iowa, studying filmmaking and multimedia art, and in 1972 received her Master of Fine Arts in painting. In the same year, 1972, Sandy Skoglund relocated to New York and settled in the bohemian district of ​​Soho, considered the centre of contemporary American art. During this period she began to create her first works in the field of conceptual art. The need to document conceptual ideas prompted the artist to study photography techniques on her own.

The summer of 1977 was a turning point in Skoglund’s work. At that time the artist lived in a furnished mobile home on a farm in Remsen and spent most of her time there, experimenting with photography. The ‘doll’s house’ interior imitating sumptuous décor inspired Skoglund to create a series of photographs, ‘Reflections in a Mobile Home’. The artist captured everything that surrounded her in everyday life such as dishes and appliances and filmed parts of her own body and their reflections in mirror surfaces, trying to catch unexpected juxtapositions of forms. This series marked a new stage in the artist’s creative career, associated with a gradual rethinking of the principles of conceptual art and the search for a new artistic style.

In the late 1970s Sandy Skoglund finally abandoned painting in favour of photography. This was fuelled by the artist’s interest in pop culture, kitsch aesthetics and her obsession with commercial photography. Skoglund was fascinated by the ‘sterile’ images that produced the image of the American Dream. She was particularly drawn to pictures of food in glossy magazines and catalogues. As Skoglund says, ‘I was amazed at how cleverly the advertisement manipulated the consumer’s mind.’ In the ‘Still Life’ series of photographs from 1978 the artist takes an ironic view of the strategies for creating advertising images. In her photographs the traditional food of the American middle-class is transformed into a decorative object or an optical illusion. Starting with the ‘Still Life’ series, food is one of the most importance themes in Skoglund’s work. According to her, this is the most universal language, understood by everyone: ‘After all, everyone eats,’ says the artist.

In 1980 Skoglund took one of her most famous photographs, ‘Radioactive Cats’, in which she depicted a post-apocalyptic scene of life after nuclear disaster. This image marked the beginning of her work with installations that she subsequently photographed. This unique combination of several art forms has made ‘Radioactive Cats’ a symbol of the tableau photography concept. At first glance it may seem that the frame was made using Photoshop, but in reality the bright green animals in the picture are sculptures that the artist personally sculpted from plaster clay. She made 25 life-size figures of cats especially for the photograph and placed them next to actors who performed pre-directed actions. ‘I feel that it is a hopeful message because the cats seem lively and able to keep on living,’ Skoglund explained in one of her interviews. ‘The role of the people in the scene is not clear. Their future is ambiguous, and this is intentional.’

Skoglund received a grant from the National Endowment for the Arts in January 1981 and this enabled her to purchase a new lens for her Toyo large format camera. With this the artist took the iconic photograph ‘Revenge of the Goldfish’, devising a surreal image that blurs the line between dream and reality. ‘My work is based on a Frankenstein model where the human beings have created a world that is out of control and turns on them,’ says the artist.

In 1981 ‘Revenge of the Goldfish’ and ‘Radioactive Cats’ were shown at the Whitney Biennial, the most important event in the US art world, and Skoglund achieved a leading position in the field of experimental photography. Over the following decades the genre of tableau photography became central to her work. The largest museums in the world have specially commissioned her installations. Photographs of the installation ‘A Breeze at Work’, commissioned by the Walker Art Center in Minneapolis, were premiered there in 1987 at the ‘Sculpture into Photography’ exhibition, and in 1989 Skoglund created the installation ‘Fox Games’ for ‘The Invention of an Art’ exhibition organised by the Centre Pompidou in Paris. In June 2000 she completed work on the ‘Breathing Glass’ project, which premiered at the Museum of Arts and Design in New York.

Sandy Skoglund : Between Fiction and Reality