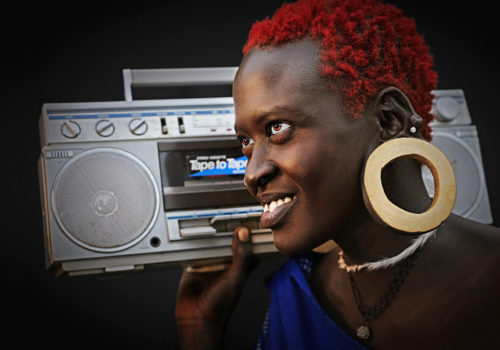 As part of the festival ‘Fashion and Style in Photography 2021’ the Multimedia Art Museum, Moscow presents the exhibition ‘Vulnerable?’ by Olga Michi, the Russian photographer and film author.

At the focus of her attention are the problems associated with world globalisation. Civilisation and technological progress have today reached the most remote and hidden corners of the planet. The modern consumer society produces universal codes and trends. Their widespread transmission leads to loss of identity, the disappearance of rare languages, unique cultures and ethnic groups.

Olga Michi’s ‘Vulnerable’ project is dedicated to the theme of preserving the culture of the peoples of Africa, Asia and the North, whose traditions are in a bizarre symbiosis with the innovations of modern European civilisation.

The exhibition includes three sections: ‘South’ is about the peoples of Ethiopia in the Omo River Delta; ‘East’ tells about the indigenous people of Southeast Asia living in remote mountainous areas on the border of Tibet, Myanmar, China, Thailand and India; and ‘North’ chronicles the culture of the inhabitants of Chukotka. The exhibition also presents the film ‘Small People Big Trees’ (2016, concept author and producer: Olga Michi, director: Vadim Vitovtsev) about the ethnic group of the smallest people on the planet, the Baka Pygmies living in the rain forests of the Central African Republic. The film has won many international awards, including: the Hot Springs Documentary Film Festival (USA) in the Best Environmental Story nomination; the Main Prize in the Heritage category of the Ekofilm Festival (Czech Republic); the Best Story NaturVision Filmfestival (Germany); the Best Documentary Film prize at the International Festival of the Red Cross and Health Films; the Special Jury Prize at the Zero Plus International Film Festival (Russia), etc.

There is a reason why the title of the ‘Vulnerable?’ project ends with a question mark. From the point of view of modern civilisation, indigenous peoples are certainly vulnerable. Civilisation is actively advancing, destroying their habitats, supplying them not only with basic necessities, but also with weapons, drugs, and alcohol… Increased tourist interest forces small ethnic groups to turn customs that gave their life value and meaning into a commodity for sale. A superficial view of these peoples as simply part of a novel entertainment also makes modern civilisation more vulnerable, since today we face new challenges, primarily climate change and environmental disasters. These challenges require our civilisation, and each one of us, to fundamentally change our mode of life and values. Indigenous peoples who have managed to preserve their way of life through the centuries are in some ways stronger than those who become helpless and vulnerable if they lose the gadgets they rely on.

‘The people in these photographs are not at all helpless. Some carry trophies obtained from hunting animals that we Westerners encounter only at a safe distance… To look at the photographs of these people with a sense of condescension towards their helplessness would undoubtedly be a delusion,’ says Olga Michi.

Olga Michi tried to see the personalities in her subjects, developing the traditions of world-famous African photographers Seydou Keïta and Malick Sidibé. The characters appear as they chose to show themselves. The protagonists are in full control of their image and mise en scene, posing with the objects they themselves selected. Some are dressed in authentic ancestral clothing or folk textiles. Some wear traditional ornaments, some pose with a boombox or carry a weapon such as an AK-47 assault rifle. One subject is shown with an iPhone, another sits on a motorcycle.

The trappings of modern civilisation are being introduced into the daily lives of indigenous peoples. Destruction of ethnographic stereotypes makes us think about the complex problems of global cultural symbiosis.

Olga Michi often quotes the famous poet and preacher John Donne: ‘No man is an island entire of itself. Every man is a piece of the Continent, a part of the main … Therefore never send to know for whom the bell tolls; it tolls for thee.’ A threat to one of us is a threat to all.

Olga Michi’s project teaches us to look more closely at others, to listen, hear and learn from the experience of others. The seemingly vulnerable life of small nations turns out to be a unique experience of wisdom, the ability to build a life in harmony with ourselves, with other people and with an ecosystem where we are all interlinked.

In 2022 the ‘Vulnerable?’ project will be showcased at the Mario Giacomelli Museum of Photography (Senigallia, Italy).