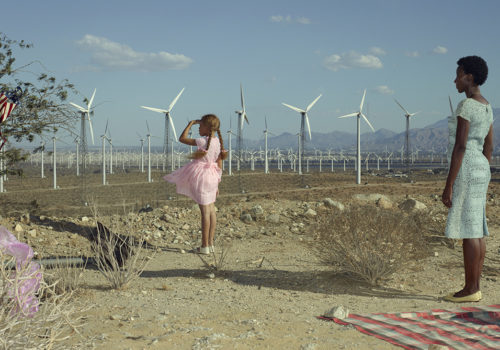 This year MAMM showcases Erwin Olaf’s series ‘Shanghai’ (2017) and ‘Palm Springs’ (2018), in which the artist explores the problems of modern civilisation and analyses their consequences — loneliness, loss, disconnection, inequality and the desire to appear yet not to be… As the culmination of this exhibition each series features video portraits, for which Erwin Olaf asks the chief characters looking into the camera to directly address the viewer with requests that are clear and close to everyone: ‘Love me,’ ‘Hear me,’ or ‘Touch me’.

Shanghai is an important Chinese industrial centre and for the artist it represents a symbol of inexhaustible energy as well as inexorable progress, like the adolescent who is not yet accustomed to self-doubt. The project is designed in the style of the 1920s to 1940s, the period between two world wars. At this time the city experienced a rapid economic upturn, although Shanghai was riven by economic and political problems: Great Britain, America, France, Japan and Germany divided the city into territories with their own jurisdictions, which inevitably resulted in conflicts with China. It was only after the Second World War that the city became part of the People’s Republic of China.

In the ‘Shanghai’ series Erwin Olaf masterfully conveys the lively atmosphere and ‘pulsating’ rhythm of life in a metropolis that never sleeps, emphasising against this background the ever- growing loneliness of his characters, as they exist anonymously among a multitude of people. In this series the artist concentrates on the younger generation who are trying to discover their identity, torn between tradition and modernity, poverty and wealth.

The artist appeals to universal emotions. This becomes especially noticeable in the video portraits of the ‘Shanghai’ series. The format of short looped videos resembles commercials, but unlike advertising, which aims to arouse the desire of the audience, Olaf uses videos to draw attention to people’s fundamental needs, which are repressed in modern society: in a world where everything is subordinated to work, there is no time for personal life and this leads to isolation, lack of intimacy. It seems that the self-absorbed characters of the ‘Shanghai’ series have already lost the ability to make a saving gesture towards each other.

The greenish colour filter that Olaf used when photographing for the series lends the images a cool atmosphere, and the lighting reminiscent of big city neon lights only further emphasises the people’s loneliness.

Palm Springs is the largest city in Riverside County, California. In the 1960s it became a popular place of residence and resort location for high society. The glamour of postwar life is still visible today in the city’s expansive properties with villas designed by the likes of Richard Neutra (1892— 1970), Albert Frey (1903—1998), or Donald Wexler (1926—2015). The city still attracts celebrities, but is slowly losing its lustre. In this deserted paradise for casino, spa and golf lovers, even the greenery withers away without waiting for irrigation that is expensive and no longer be justified from an economic or environmental perspective. Scattered throughout the city are windmills built in order to generate at least some electricity from renewable sources.

Landscapes help Erwin Olaf to reveal the vast distance between dream and reality, the glorious past and the joyless present. In the artist’s staged photographs the idyllic picnics and easy-going party scenes recreated in the spirit of the 60s contrast sharply with storm clouds and parched grass.

When choosing the models for this series, Olaf consciously selected people with different skin tones because he sees this work as a statement against racism: ‘Who can one still discriminate against when everyone has mixed with one other?’ says the artist. ‘I took that as a starting point for the casting.’ However, we have to concede that in the pursuit of social equality, humanity has not made significant progress. The artist had to concede, however, that his desire for social equality does not correspond to reality.