Maison Bonfils, a photographic adventure between the Cévennes and the Middle East 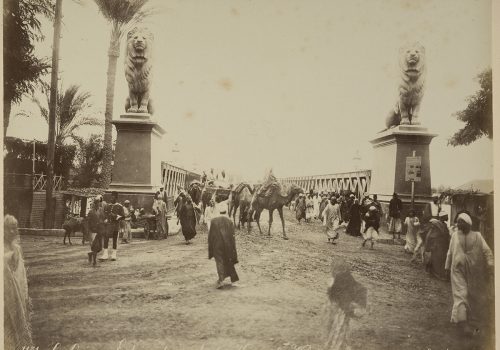 If the Maison Bonfils is still little known to the inhabitants of the Cévennes, the starting point of its history, the photographs of the Maison are present in many national and international collections.

They constitute one of the most important productions devoted to the Middle East of the second half of the 19th century. The exhibition presented at the Musée du Colombier d’Alès therefore takes on its full meaning, to discover the history of this family who chose to leave their studios in Saint-Hippolyte-du-Fort and Alès to settle in Beirut in 1867, in order to capture and market “views of the whole East” intended for tourists. Within the images of the Orient, the views of the pyramids, the Parthenon or the alleys of Damascus stand out for their sense of framing and their humor, sometimes Félix Bonfils does not hesitate to appear in disguise or to fake his images.

In the Beirut studio, his wife Lydie herself photographs genre scenes and portraits, becoming one of the very first female photographers in the Orient.

At the end of the century, their son Adrien continued the company’s activity and opened it up to modernity, seeking to colorize the photographs.

The House permanently closes its doors 70 years after its creation.

The set of 120 photographs, negatives, albums, stereoscopic views gathered in the exhibition thanks to the support of the Alésien Jean-François Gallier (1954–2019) and the Multimedia library of architecture and heritage (MAP), allows to understand the diversity and richness of the Maison Bonfils activities.

This exhibition is co-produced by the Museums of Alès Agglomeration and the MAP.

activities around the exhibition:

Félix Bonfils has a facebook page where the museum regularly tells about his adventures in the Eastern Mediterranean, his shots, the way he shoots his images, his aides-de-camp, his family… Come and discover her and follow him @felixbonfils

A catalog and a children’s games booklet have been specially designed.