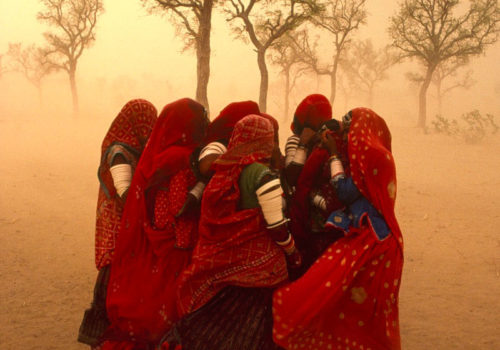 1970s and 1980s: The world of photojournalism and documentary photography is changing

The emergence of photojournalism always depended hugely upon technological development of the camera. With the introduction of the 35 mm Leica camera in the 1930s, it was made possible for photographers to move with action, taking shots of events as they were unfolding. The years from the 1930s until the 50s have often been described as the ‘golden age of photojournalism’. The Vietnam War has often been described as the last ‘photographer’s war’, and since the 1970s the influence of photojournalism has gradually declined – the sense in an image could improve current living conditions was questioned and the belief that the camera does not lie and present a completely transparent view has gradually declined. This directly affected picture magazines such as Life, Picture Post and Paris Match and photographers were faced with fewer opportunities to disseminate their work through these avenues.
One of the Magnum members whose work was still published widely in the 70s was Meiselas. Meiselas, born in 1948, is featured in this exhibition with one of her early photographs, Lena in the Motel. She joined Magnum in 1976 and her well-known photographic essay of the Sandinista revolution in Nicaragua has been published in numerous magazines across the globe.

However, the 1970s also mark a time when the art world acknowledged the cultural importance of photojournalism and photojournalists were increasingly given exhibitions at museums and galleries. As a result, many Magnum photographers began to exhibit their work through exhibitions and books.
Ian Berry, who was personally invited to join Magnum by Henri Cartier-Bresson, successfully shot editorial assignments for publications such as the National Geographic, Fortune, Stern, Geo, Esquire, Paris-Match, Life and various national Sunday magazines. However, he also started to disseminate his work in exhibition and book form early on in his career. The image featured in Magnum 62, entitled Man with his daughter and kitten, Whitechapel, London, England, 1972, was from a series Berry was commissioned to make for the Whitechapel Gallery, illustrating daily life in East London.

Burma-born photographer Chris Steele-Perkins, a major contributor to photojournalistic trends since the early 1970s, is a good example of a photographer adapting to the changing circumstances of his profession. He became a member of Magnum Photos in 1979 and served as its president from 1997 until 1999. His work has been published in numerous books. The photograph featured in this show (Brothers, Red Deer, Croydon, London, 1976), appeared in his first book The Teds and has become one of his best-known images.

Photographer Alex Webb, featured with Bar, Gouyave, Grenada, 1979, also chose to disseminate his work in book form and up until the present day has published seven books. His work has been exhibited widely in the United States and Europe, in museums including the Museum of Contemporary Art in San Diego, the Whitney Museum of Contemporary Art and the International Center of Photography in New York. Webb is also a good example of illustrating the way that the photographic language itself was changing and evolving as well – he is known for his style, characterized by intense colour and light (how is he a good example?). Through the usage of warm and saturated tones his photographs – often of places characterized by cultural tension and rawness – Webb’s images convey a strong sense of enigma, irony and humour. These images often reveal more about the observer rather than an attempt to illustrate society’s underpinnings.

The rather provocative photographic style of Martin Parr, featured in Magnum 62 with his photograph Untitled (Girl serving Ice Cream), was also been the subject of a much heated debate in 1994 among the Magnum members. Born in England in 1952, Parr was encouraged by his grandfather, amateur photographer George Parr, to become a photographer. To support himself he took on teaching assignments and by the beginning of the 80s, Parr made an international reputation for his oblique approach to social documentary. His work aimed at mirroring the lifestyle of ordinary British people, reflecting the social decline and distress of the working class during the Thatcher era. Now known as one of the most influential contemporary British photographers, he was appointed Professor of Photography at the University of Wales in 2004, and his work has been shown in museums and institutions around the globe. Parr is also an excellent example of how – particularly in recent years – Magnum photographers have explored how their work can be used and applied in different contexts, such as film-making, fashion and advertising. Phaidon published Martin Parr’s monograph Martin Parr in 2002.

Elliot Erwitt was Magnum’s president from 1968 until 1971, after which (?) he turned to film and produced several noted documentaries and television comedies for the Home Box Office network. However, Erwitt also enjoyed an extremely successful career as a photographer before his television work; he has published over 20 photography books and his work has been displayed in numerous solo shows in establishments such as the Smithsonian Institution, the Museum of Modern Art in New York, and the Art Institute of Chicago. He is particularly well known for his black and white shots, often pictures of ironic or absurd situations, which are characterised by a humanistic sensibility.

These photographers, among many others (including Donovan Wylie, Jim Goldberg, Larry Towell, Abbas and Steve McCurry), have successfully dealt with the challenges the photography world faced in the years between 1970 and 1990. Collectively, they provided a fresh insight into international politics and culture, reported the reality of conflicts and the horror of war, and harnessed the growing power of celebrity.