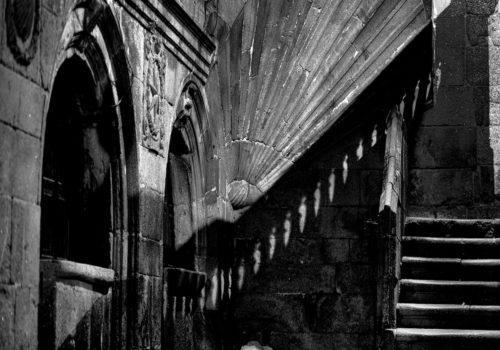 Le Corbusier said: “Architecture is the skilful play of volumes under the light”.

Every built work, in its existence, tends in fact to have conscious or unconscious relationships with light which is therefore, even in its absence, an element of every architectural work.

Regarding the architecture of the sacred places of Christianity, regardless of the historical period, I have always had the feeling that the management of light (and therefore of shadows) has been wisely modulated in order to create highly impacting atmospheres on the human soul.

Even the volumes, often enormous, the majesty and, frequently, the magnificence of the structures initially generate a feeling of “disorientation”: one can feel lost and small in large multidimensional spaces, sometimes even oppressed.

If in the believer the brightness that descends from above, the height of the aisles with the translucent walls of polychrome windows, the altar placed in the East suggest religious spirituality, a desire to rise, in me atheist all this generates at first an almost of alarm, which pushes me to seek “refuge” in the shade in whose cool stillness another world opens up to my eyes in which I begin to calmly observe those details of which in a first overview I had not become visually aware. And it is in the observation of these forms, modeled by light and shadows, in which artistic references, curious expressions of religiosity or more generally compositions dictated by the light-matter interaction are often present, in which my gaze is lost. Here I reach an inner peace nourished by a form of spirituality that could be defined as “atheist” in which in the end I find the human that expands in time and space into a sort of infinity. This spirituality is for me an “open space”, without churches and without dogmas imposed by an ecclesia.