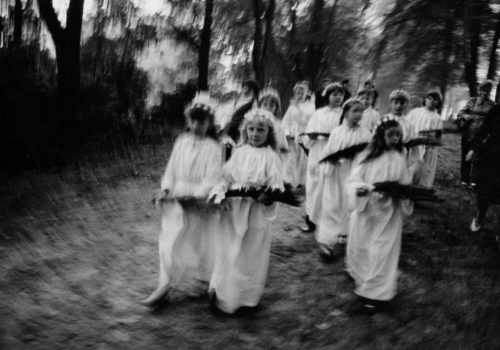 The three “insight” or featured artists at this years Look3, Antonin Kratochvil, Massimo Vitali and Nan Goldin, each had a small gallery show and then showed a larger body of work, spoke and answered questions in a two hour session at the Paramount Theatre.

Antonin Kratochvil’s exhibit was titled Domovina, which in his native Czech means home. “You can really only have one which understands you the most and I think Czech Republic is mine.”

On Thursday he was on stage with Scott Thode to act as moderator and at times it was difficult to follow but here are a few quotes. “As a photojournalist you need to feel something, but not something sentimental. I hate sentimental photography. It makes me feel like I’m cheated. I want it to be unflinching.” “I don’t think much of myself or my photography. I stay humble because I know how important it is to do what we do. Inform the public.” In response to a question about his work having things going on in the edges, he gave young photographers some advice, “I worked for the LA Times Magazine. I really wanted to have double pages. So I knew if I played things in the middle, they would never blow it up because of the gutter. So I knew I needed to have things playing on the edges.”

Massimo Vitali’s exhibit was titled Natural Habitats and was a selection of his large prints of beach and bathing scenes.
On Friday he was on stage with moderator Alex Chadwick and gave everyone a charming and humorous tour of the fine art photo market. Here are a few quotes from his session. “If I wanted, I could make them much nicer. But contemporary art doesn’t work like that. If you take a nice picture, they say ’this is too nice.’ Your reputation is ruined.”
On his success in the art market, “it was pure luck. I never meant to be a contemporary artist. They just told me I was a contemporary artist.”
On shooting in 8×10, “I was in Milan. I went for lunch. I had all the cameras in the trunk, two 4×5s, I came out and all the cameras were gone. But I still had an 8×10 and one lens. I thought this is a sign.” Despite his light-hearted way of speaking about his work he did acknowledge his serious approach, “I just refine the technique of the 8×10 camera. Not everyone has such a refined technique. All winter we spend getting things ready for the summer shoot. It’s not easy. It’s very technical.”

On Saturday it was Nan Goldin at the Paramount Theatre with Sally Mann doing the moderating. It was a brilliant pairing and despite this being the only program to start almost 40 minutes late, the restive audience was quickly captivated by this conversation. Goldin started by showing a combination of new work (small sections of paintings and sculpture) and older work (friends and lovers in varying degrees of undress) that was created for the Musee du Louvre. Titled Scopophilia from the Greek, ‘scopo’, to look, and ‘philia’, love of friends, she explained the inspiration as coming from being alone in the Louvre after it was closed and being overwhelmed and reawakened by the space, the art and the silence.

A brief back and forth on Goldin coming to Sally Mann’s 600 acre farm
SM: “You can come to the farm but you can’t steal my husband”
NG: “I’ll steal your son.”
SM: “Oh by all means, he needs someone to support him.”

On nudity in regards to children, the legal issues they both have faced in the past and photos they both have made of children urinating.
NG: “I did show children. But if you look at the paintings in the Louvre, we’ve got nothing on them. The children are naked and having sex. I mean, they are angels so they can do what they want”
SM: “In my family work there is one photo that is so illegal. The Three Graces, it depicts a child urinating, my lawyers say don’t even risk it.
NG: “Wait, I have a lot of pictures of children pissing”
SM: “I’ll give you the name of my lawyer.”

The entire conversation can be found at the Look3 web site and I recommend it.