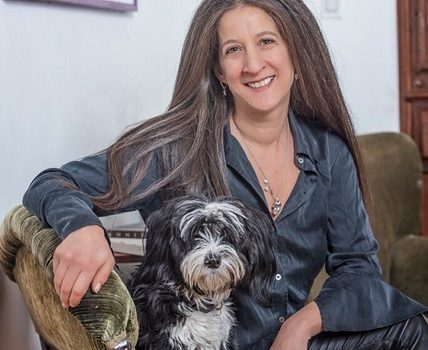 Loni Efron hightailed it to Manhattan after college and soon found her dream job: “I was buried in a dark room with a chain smoker.” So what if she choked on the air, it was a photography job , her dream ﬁeld of work. Soon, she apprenticed under master printer Jim Megargee making test and work prints for Annie Leibovitz. Working for Annie Leibovitz she was thrilled to see her prints appear in big national publications, Tom Cruise in Vanity Fair and Jerry Garcia in Rolling Stone. Her big chance came when the archivist for Leibovitz left and Loni plunged into the chaotic land of photographer’s archives: often a scene of mass confusion. As most photographers know but can barely stand to face: good useful databases are key to earning a living from one’s work. “I don’t know what I’ve got,” they would moan. “They just came to me, Help!,” says Loni.

A smart, bubbly, can-do kind of gal, Loni cheerfully tackled the issues: ﬁguring out what people had, helping them ﬁnd it, organizing traﬃc and logistics. The results were dramatic: photos could sing for their supper over and over again, and the archive could serve the photographer’s needs: instant sales, book projects, and legacies. Although she was a seat of the pants learner, Loni succeeded in trouble- shooting new technologies as she built archival applications for Leibovitz, Robert Mapplethorpe Foundation, Joel Meyerowitz, and Keith Richards, among others. Her friendly personality helped her forge a network of friendships among photographer’s assistants which connected her to photographers who were struggling with the size and scope of their own output.

She met David LaChappelle early in his career when he ran his studio on St. Marks Place above the old Theater 80. The enormous array of photographs displayed in LaChappelle’s numerous books, show how crucial it is to be able to look back, ﬁnd and print legacy work. Not too many years later, she was helping him produce works for his ﬁrst Museum exhibition at the Palazzo delle Esposizioni in Rome, Italy.

Loni was lucky enough to be mentored by Mark Boyer who founded one of the earliest very high-end digital studios, and thus had a screaming need for good records. She gained enough experience to begin to customize databases, solutions that she then streamlined in iArchive so that she could meet the needs of working photographers who could not commission their own system. “I knew what people needed and how to devise cheaper versions. Everybody has to start with ﬁguring out what they have and where to ﬁnd it,” recalls Loni. For example, Bob Gruen whose archives brim with rock stars, “I created a ﬁeld customized in his database for the Rocker number, so Gruen could easily search for every image of a star by number.” Another client solution anonymized nude subjects, so they could be found with an alias.

These intensive explorations of individual archives gradually led Loni to take a role in creating photo books. “I made photo gift books for Keith Richards every year, which led to becoming the photo editor for his book Life in 2010,” she recalls. “Thestrategy for that book was to ﬁnd images that had never been published, so the book would be very personal and yet unfamiliar.” This of course was made possible by the thorough database she had created for Richards, and by what she had seen in that process. And Richards’ long time manager, Jane Rose made it easier because she had carefully documented the rights from the many photo shoots in which Richards starred.

She became a curator for Mark Seliger booking venues, choosing and sequencing images. Her evolution from archivist to curator and gallery owner was a natural progression that built on her familiarity with bodies of work. “Seliger needed someone to go with him, and even when I was nursing my oldest son, I managed to get to Paris to set up a show. Luckily, my husband came as child care,” she says. “Sometimes I would ﬂy overnight, work the day and ﬂy back the next, just to coordinate with family duties.”

Eventually she founded her own gallery in Harlem. The Ilon Art Gallery began with group shows, often of the musicians that her photographer clients had documented. These days, she is exhibiting more thematic and solo shows which attract a fun crowd that is developing around the lively Harlem art scene, which ilon Art Gallery is now an important player.

Currently on view at ilon Art Gallery Troublemakers, photography by Art Shay opening January 16, 2020. What does democracy look like? And when should we cause trouble to pursue it? Troublemakers by Art Shay fuses photography and history to demonstrate how racial and economic inequality gave rise to a decades-long struggle for justice in one American city.

As Loni Efron always has a ﬁnger on the newest technology, there is an interactive, online view of the exhibition opening January 20, 2020. Please logon at www.ilonartgallery.com/featured-exhibition for a for your ﬁrst virtual gallery experience, wherever you are!

So, “Am I safe?” is the question Loni repeatedly ﬁelds, as photographers scrambled to limit reproduction in the age of endless digital circulation. This led to her interest in blockchain technology, which is used for Bitcoin and other crypto currencies. Blockchain technology records every transaction, and authenticates and documents both provenance and use, so it is ideal for handling artist’s work,” she explains. The technology can incorporate a “smart contract” that patrols single use and protects the shared digital assets. She only just began her dive into blockchain technology for provenance and authenticity, and looks forward to new advances. In three years’ time she says blockchain will be so familiar that everyone will somehow be using the technology in most industries.

Sharing and monetizing but also protecting and helping photographers navigate modern technology, Loni has carved out her own niche in the photography and archiving world.