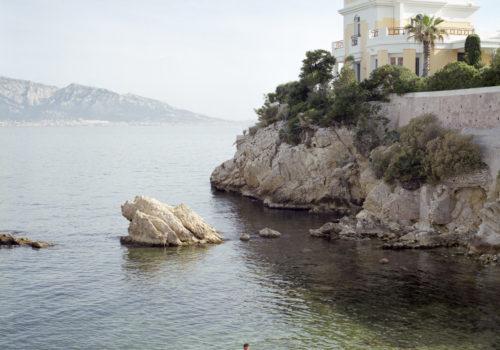 Littoral Marseille is a series that documents, in the form of a puzzle, a narrow strip of land: 20 km long from Estaque to Prado beach, a few tens of meters wide, always as close as possible to the sea. in Marseille, the sea is neither central nor touristic. The center is the Old Port and La Canebière, not the Chemin du littoral hidden under a highway. Thus, to the south, the sea is offered along the Corniche Kennedy and sometimes its extensions, but you have to take alleys and pass under porticoes to see blue coves and sumptuous houses. To the north, on the other hand, you have to cross roundabouts and junctions, go along the gigantic and absolutely forbidden port.

Why a puzzle? Initially, I wanted to be systematic and find the keys to this amazing city. And then, having read Flaubert, Stendhal and Cendrars admitting their incomprehension, I stopped wanting to understand to better let myself be caught up. I photographed Marseille with this sentence from Cendrars in mind: “Marseille is a city according to my heart. (…) Here everything seems to have been relegated: the sea, behind desert hills, the port, damn it, so much so that one can love even its ugliness: the endless billowing of its sad apartment houses, its tangled alleys, the new factories and the refineries, the Italian-style palaces of the new rich (…) Everything seems lost in the city and, really, none of that matters. »

This misunderstanding accepted, I was able to discover what I had finally come to photograph: the place where my father, in 1962, had landed for the first time in France, the one he had immediately fled to take refuge in Paris leaving there all his family, and where he nevertheless returned every year to live a summer which resembled that of Algeria. But after I was born, he never set foot there. He never took me there. And Marseille has joined a long string of secrets in the paternal Pandora’s box.

Littoral Marseille is a series in the form of discovery, homage and reconstructed memory.