Lisa Barnard – The Canary and the Hammer – Guernsey Photo Festival 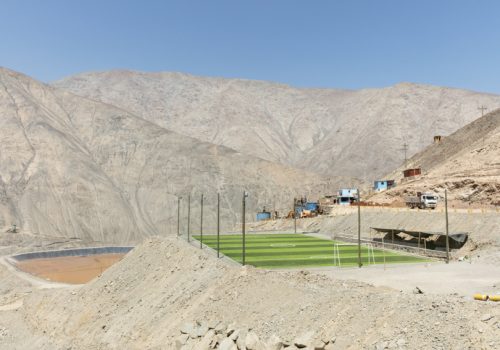 “What human beings seek to learn from nature is how to use it to dominate wholly both it and human beings”. Horkheimer and Adorno in The Dialectic of Enlightenment (1944)

“The Canary and The Hammer” is a complex, international account, detailing the inherent human reverence of gold and its affair in the ruthless endeavour of progress. Photographed across four years and four continents, the work connects seemingly disparate issues and aesthetics through a mix of stills, moving images and archival materials, sourced from both collections in libraries and online.

Commencing in Peru, a land once plundered by Latin conquistadors for its abundance of precious metals, Barnard depicts a mountainous desert horizon, occupied by a small group of artisanal gold miners. By focusing on the female members of the ‘Pallaqueras’ (mineral sorters), Barnard tells the story of those who sort the ‘waste rock’ above ground for its gold content. These women embody both the first stage in bringing the element to the modern global market and the increasingly dangerous and exploitative requirements of late-capitalism.

Much of the series investigates Man’s abstract but innate desire to occupy territory – demonstrating the direct links between conquest and categorisation. From the initial arrival of English colonisers in Jamestown, to the latest space-technologies developed by NASA, Barnard shows how cartography, geographic rendering and photography serve a speculative function for colonial impulse and the acquisition of wealth. Reflecting on these desires, the work displays a wide array of visual and photographic approaches from photoetching to three-dimensional digital landscapes. The aim is to visualise and reference the histories through which gold has driven and maintained these attitudes. When documenting the gold mines and ghost towns of the Sierra Nevada, Barnard used an analogue stereoscopic camera, directly alluding to the works of Carleton Watkins, who had photographed the region in the years following the Californian Gold Rush. Barnard’s images reveal an unmerciful passage of time, depicting the skeletal ruins of a landscape mutilated and abandoned by those who sought its treasure.

The traits of contemporary capitalism are economic inequality and ecological devastation, with the latter accepted as the price of the former. For example, the flow of E-Waste (and it’s high content of precious metals) into China has created a competitive market for illegal and dangerous extraction and is evidence of a disregard to the health of those that work to extract gold from technology and the land in which the toxic chemicals used in the process accumulate. Whilst these images offer a glimpse into the dark underbelly of gold, others evidence the investigation into various experimental practices whereby the element is at the forefront of positive change. From medical applications, to the commercial potential of nanoparticles and creating photoluminescent plants, a full spectrum of opportunity completes the series, testament to Barnard’s comprehensive approach to photographic practice.