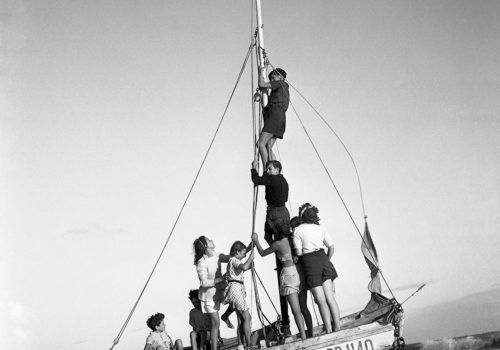 “This book adds a magnificent chapter to the life and work of one of the most important photographers of the 20th century. Discovering Doisneau here in the countryside, among the peasants, in the villages and landscapes of the Basque Country, Limousin, Lot and Dordogne gives us a delicious aesthetic shock. ”

Excerpt from the preface by William Boyd *

Known for his photographs of Paris and the suburbs, Robert Doisneau has also traveled widely in the southwest of France. As a publishing house established in the Dordogne, we are pleased to publish 160 partly unpublished images  of our region, mostly taken between the 1930s and 1960s.

From the Basque Country to Bordeaux, from Poitou to the Limousin via Île de Ré and the Dordogne, the book bears witness to the life of a “provincial” territory which sometimes lacks representations. But, outside the cities, Robert Doisneau who considered himself to be an “image fisherman” would say that he found in the Lot “the most beautiful landscapes in the world”.

With nearly 500,000 photographs produced, the work of Robert Doisneau remains unclassifiable. The 224 pages here contain photographs of workers in the fields and the sea, vacations and landscapes. All of them tell a little about his generous and attentive gaze on the world.

* William Boyd is a British screenwriter, director and writer translated worldwide. He was even personally chosen by Ian Fleming’s family to write the sequel to James Bond’s adventures! Latest novel: Trio (Editions du Seuil, 2021). He divides his life between London and his house in Périgord.

After Doisneau et la Dordogne, published in 2016 (now out of print), we continue our work with Annette Doisneau and Francine Deroudille, the photographer’s daughters, this time in a bilingual French / English edition. Published as part of the new Paesina collection which essentially brings together artist monographs, with Doisneau and the southwest we hope to offer a fine object, between heritage and artistic testimony.

In bookstores in the South-West

On order throughout France

Public price including VAT in France: 37 €