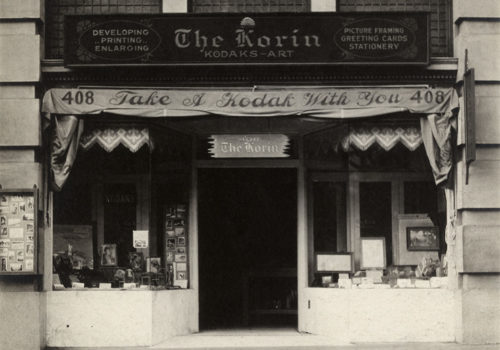 The Korin, an enterprise spread across three Los Angeles locations circa 1920, was owned and operated by photographer Taizo Kato (1887–1924) and his domestic partner, Kamejiro Sawa (1889–1956). The Korin’s operations included: a Kodak store, a film printing and processing plant, and a main shop and gallery. The Korin’s gallery sold and exhibited pictorialist photographs alongside ceramics, prints, and paintings. The business was located within the Little Tokyo section of Los Angeles and, by serving all of the needs of local art photographers, helped foster the growing Pictorialist movement that was emerging in LA’s Japanese American community, as well as other major cities along the west coast.

Kato’s multifaceted activities in connection to The Korin (as a photographer, painter, organizer, gallerist, and technical expert) could be seen as a West Coast corollary to Alfred Stieglitz’s role as practitioner and organizer who championed other photographers in his orbit, as well as photography itself as an art form. Kato’s own painting practice, as well as his work presenting other painting and ceramics at The Korin, exemplifies the way that the conception of pictorial photography was closely tied to painting and other art forms. The inclusion of ceramics within The Korin demonstrates how Japanese cultural influences were being hybridized with European art and regional American influences. Kato was a member of the artistic group Shaku-do-sha which had been founded by a group of Japanese American painters. The group developed close ties with Edward Weston and, after Kato’s early death, went on to present Weston’s work throughout the 1920s in a collaboration that is generally regarded to have been a case of mutual influence.

Kato’s own photographs fall firmly within the pictorialist tradition while often embodying the Japanese influence on west coast pictorial photography. It’s an interesting feature of photography from this movement and period that it was at once regional and internationally influenced. While Pictorialism as a movement typically sought to emulate European art, what distinguishes Japanese American Pictorialism is that it just as commonly looked to traditional Japanese art for influence. A picture like Pine Tree on the Pacific Coast, typifies this. The gnarled tree on the coastline clearly evokes the classic Japanese image of a twisted tree overlooking a windswept vista, familiar from countless Ukiyo-e prints. Bonsai trees have historically been cultivated to emulate the wind-shaped trees found on mountain precipices. The Pacific Ocean stretching to the horizon serves as a reminder of the geographic link between the US West coast and Japan—the body of water whose Pacific trade routes brought Japanese immigrants to the merchant cities clustered around west coast ports.

As a hub for photography, as well as overall artistic activity, it’s not surprising that Taizo Kato and The Korin intersected with the nascent motion picture industry in Hollywood. Kato shot portraits of a number of Hollywood stars, seen here is Kintarō Hayakawa, known within the film industry by his stage name Sessue Hayakawa. At the time of this photograph Hayakawa had emerged as one of Hollywood’s earliest sex symbols and was one of the highest paid stars of his time. While enjoying great popularity with female film goers, his career suffered from increasing anti-Japanese sentiment and he was typecast in roles where he portrayed forbidden lovers and villains.

Taizo Kato’s untimely death at the age of 36 meant that he never saw the fruition of the seeds he planted, including the formation of Japanese Camera Pictorialists of California. Nevertheless, his influence is clearly felt in the vibrant culture of fine art photography that emerged in the prewar period within Japanese American communities in the major west coast cities.