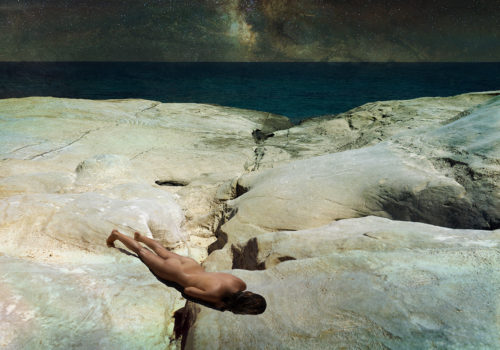 An ongoing interest in temporality has led Laurel Johannesson to create her two most recent series of works, Situations and The Oblivion Seekers. In the latter she explores the concept of oblivion or forgetfulness. In Greek mythology, Lethe was one of the five rivers of the underworld. Also known as the river of unmindfulness, the Lethe flowed around the cave of Hypnos and through the underworld, where all those who drank from it experienced forgetfulness. In the series of work, she has moved from underwater, explored in series such as Subacqueo, Thirst, and Metamorphosis … to above water to depict the expanse of the sea in relation to land or horizon, and human or bird. The underlying theme is that of instances of being in a state of precarious limbo. Laurel refers to her human and avian subjects as The Oblivion Seekers and they are frequently depicted between freedom (flight) and safety (land) with the turbulent sea the uncertain suspension that they must navigate between the two. They occupy a kind of limbo space. It is this in-between space of protracted temporality that Laurel is interested in revealing. She also uses light to convey a sense of duration of time or perhaps timelessness. In some of the images and video, the time of day is unidentifiable …fluctuating between sunlight and moonlight …stars in the sky and sun on the waves. Spatial references are also manipulated …with sky becoming sea …and sea becoming sky. The Oblivion Seekers are searching for a space where time is suspended, where they can hover in limbo, and temporarily push memory and knowing into oblivion.

Situations is a new series of work (beginning in the Spring of 2020) that explores various psychological states of being, using the beach or shoreline as a temporal space where transformation occurs. Laurel focuses her camera primarily on her own body and the bodies of other doppelgängers, situating them in locations that abound with psychological and often physical tension, with subjects frequently caught in the middle of ambiguous scenarios or in seemingly emotional states. The figures are situated in natural settings that Laurel photographs in remote, mystically-charged locations in Greece. These settings usually include a shoreline or sea cave, as she sees the beach as a liminal site…the transformative space between two temporalities. The beach is a mesmeric place. It is a threshold where the intimation of celestial powers is murmured by the vacillation of the tides. The beach is the quintessential liminal zone. It is neither land nor sea, an expanse of precariousness that reverberates with the sound of unpredictable seas, …placid, serene, and soporific …or unsettled, chaotic, and disconcerting. It is a margin that unveils a space of intensified sensations that are fleeting, idiosyncratic, and fugitive. It is often a place of naked truth, of judgement, a site of initiation into consciousness. In this work, the verge of transition from the sanctuary of land to the vastness of the imposing sea, provides a threshold for self-awareness, and an exploration of aloneness, isolation, and remoteness.

Laurel Johannesson is currently exhibiting work at Mana Contemporary in the exhibition Transatlantico presented in partnership with Palazzo Monti.