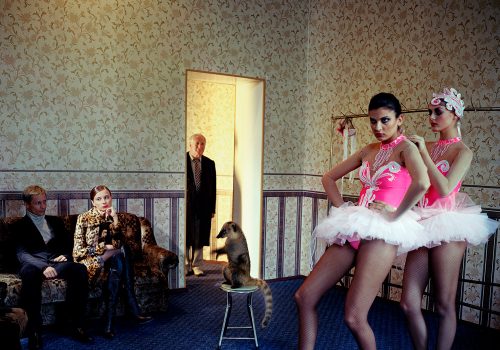 Yancey Richardson presents Larry Sultan: Domestic Theater, the first exhibition of the California artist (1946-2009) in New York since 2004. The photographs are selected from Sultan’s series Pictures from Home (1983), Home Movie Stills (1984 – 92) and The Valley (1997 – 2003) in addition to editorial work made between 1993 and 2003 for Wallpaper and Bottega Veneta. Sultan probed the medium of photography, experimenting with its structure and questioning its truthfulness. A hybrid of documentary and staged photography, his photographs reveal the psychological nuances found in the everyday suburban landscape and family life. Throughout, Sultan’s images negotiate between reality and fantasy, domesticity and desire, revealing mundanely familiar suburban surroundings as loaded cultural symbols.

Pictures from Home chronicles Sultan’s parents’ pursuit of the American dream, played out in the suburban landscapes of Los Angeles and Palm Desert, California, while simultaneously exploring the complexities of family dynamics and mythmaking. Fully realized as a book in 1992, Pictures from Home combines spontaneous photographs of the artist’s parents with those he staged, home movie stills, interviews and ruminations of his own. The frames Sultan selectively printed from his family’s home movies reveal an idyllic narrative of the family on vacations, in convertibles or playing in a sundrenched yard. Sultan describes these as “…folktales – epic celebrations of the family. They were remarkable, more like a record of hopes and fantasies than of actual events. It was as if my parents had projected their dreams onto film emulsion. ”

Intrigued by Sultan’s blending of authenticity with fiction, and his merging of the mundane with the absurd, a wide array of publications such as the New York Times, Details, Vanity Fair, Interview and W commissioned him to bring a similar sensibility to their pages. Forward-thinking photo editors and magazines valued Sultan’s uncanny ability to visually illuminate their stories while simultaneously interrogating the imagery and its cultural underpinnings in a way that was sensitive, nuanced, seductive, and darkly humorous. Within the confines of these assignments, Sultan found a way to make work very much his own, imbuing the resulting pictures with a characteristic ambiguity, mystery and absurdity.

Just as his personal work shaped his editorial work, the assignments informed Sultan’s personal projects, leading most significantly to the extended series The Valley. On assignment in 1997 Sultan discovered that the adult-film industry frequently rented the suburban tract houses of his childhood neighborhood in order to create x-rated dramas. Photographing during porn shoots in the homes of dentists, lawyers and accountants, Sultan juxtaposed the naked bodies of actors with the mundane domesticity of the homes, including glimpses of the jeans-clad production crew and their hard-edged equipment as visual clues. As Sultan explains, “I’m interested, not in the construction of pornography, but rather in dismantling it, in exploring domesticity, the construction of desire; all as a way of dealing with my own projections, my own nostalgia of growing up in those houses…by photographing this I’m planted squarely in the terrain of my own ambivalence – that rich and fertile field that stretches out between fascination and repulsion, desire and loss. I’m home again.”