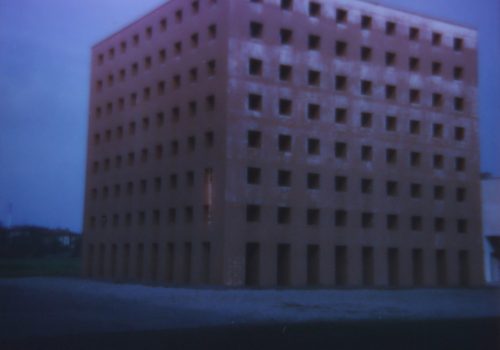 A typology of Lara Gasparotto’s body of images brings to the fore the insistent figure of woman: young, sensuous, pensive, sometimes to the point of withdrawal. It is them, those immature sexual figures, that make it possible to bring the intimate together with symbolic representations of the world. What is revealed is an entire choreography that consists of a quest for an unfolding: how do we get out of the fetal and our grandiose projections that replace a true experience of the world ? How do we throw ourselves into the water, that other recurrent figure in the book? Swimming, bathing, diving: all those scenes of baptism in the physical sense of the Greek term baptein, “to plunge in a liquid.” Until the very idea of the sacred ritual: a feminine silhouette dressed in lamé seems to be pouring a little water on the head of a bare-chested man. This simplified baptism ceremony proves to be one of the keys to Lara Gasparotto’s book. A series of baptisms of desire, rituals both erotic and sacred, images of ghosts also, and of troubling landscapes. Here, every intimacy that reveals itself is a sacred gesture.

Lara Gasparotto practices photography in a shamanic way. Of course, the shots she keeps of her travels and her everyday life have the raw character of personal experience, but far from any naturalism, they contain traces of the sacred. It is in this that Lara Gasparotto seems to have doubts about the world and to believe in raptures. But the raptures concern the photo assemblages before even the fitful bodies, and to arrive at these tensions, the photographer practices an art that brings different ‒ even clashing ‒ types of photographs face to face.

The photographer’s work proceeds from a dynamic of the relationships between the images. For her generation, black and white and color, the posed image and the snapshot, the documentary style or symbolic research, reproduction and original combine continuously, ignoring categories and schools. A vernacular image, a historical reference or a fortuitous montage, even technical negligence are never considered in terms of value alongside a portrait or a landscape. It could also be said of the rhetorical schemas: no narration, strictly speaking, or daily chronicle, or on the other side of things, any thematic or literalist conceptual sequences… The world of Lara Gasparotto’s work has been participating in this reinvention of photographic grammar here in the early twentieth-first century.

The artist likes to remind us of the intuitive character of her practice. The travels and the loved ones, the impressions and the hazards that little by little reveal a poetic universe. Lara Gasparotto thus succeeds in producing a representation of the world based on an intimate tone. This passage from the prosaic to the symbolic, from the everyday to sometimes mystical surges, involves the insistent iconography as well as the heterogeneity of visual categories: thus is the ecstatic born from a kaleidoscope of visual practices that continuously recomposes the figures of desire.