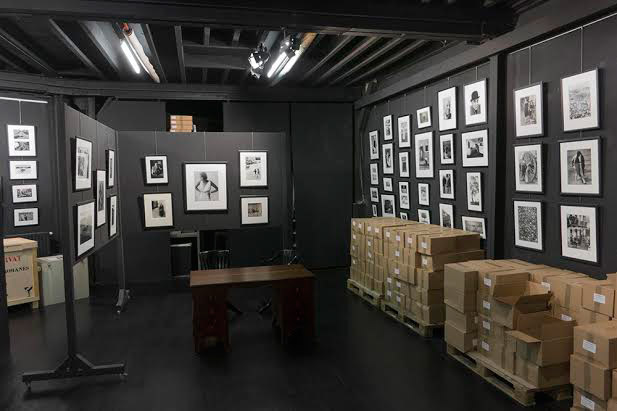 Throughout his career, Frank Horvat has exchanged photographs with friends and fellow photographers. Over time he has built up a “little museum” representative of a certain history of photography, with works that move him and illustrate his conception of the medium. He’s agreed to speak about a few of them and share what they mean to him. Here is what he had to say:

I begin with a series of photos by Alex von Gelder. I met von Gelder a little over a year ago. After seeing photos from his “hands” series in a Zurich gallery, I called him up and we quickly became close friends, almost as close as I’d been with three other great photographers: Giacomelli, Boubat and the Spanish photographer Aradon. These are people I get along with. There’s a mutual admiration.

This photo collection might seem ill-assorted, but “ill-assortment” is my hobby-horse for a fundamental reason: I believe that a photograph must go beyond its subject. There’s no such a thing as a photo without a subject, it’s essential, unlike painting. But the the subject has to be exceeded. For example, it’s important to know that you’re looking at guts in this picture. Otherwise it becomes visual art and that’s less interesting. Like Barthes said, “the noema of photography is the ‘it has been.’” What he means is that you don’t look at a photo like a visual composition, but by saying, Louise Bourgeois was there, and the photographer was there to take her picture. I want to be able to imagine that the photographer was present. This idea, I believe, gives it a power that today’s art photography is missing. The portraits of Louise Bourgeois interspersed with pictures of meat go beyond their subjects. I find them interesting because they show the perspective of the photographer, Alex von Gelder.

This is the case for most of these photos. They could never be reproduced. They’re a kind of miracle.