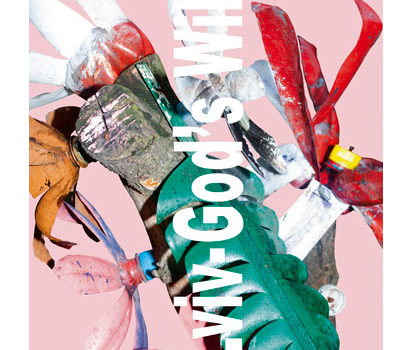 Last month in Kyiv the first Kyiv Photo Book International Festival took place. The festival, which is planned as semi-annual event, presented both Ukrainian photo books and those from other countries. Number of visitors as well as demand for photo books at the first festival exceeded expectations of its participants and organizers.

The festival has brought to spotlight a number of books from young Ukrainian photographers. Some of them were known abroad even better then at homeland. Like LVIV – GOD’S WILL by Viacheslav Poliakov, which is the authorís view of contemporary Ukraine, made by photographing people and objects in small village near Lviv, and then isolating and superimposing them against colorful backgrounds. The photographer sees the project as ìnaive visual subculture of public spaceî. With this project Poliakov was selected as one of the last yearís Foam Talent.

Or TASTE OF POLAND by Anastasiia Nekypila. Wieliczka Salt Mine in Poland is one of the recognizable monuments of culture, and it attracts millions of tourists from all over the world. When you browse Instagram through mass of pictures taken by the tourists, you find a lot of pictures, among the other ones, when they licking salt walls. With passion or disgust, either laughing or playing roles. The book ironically shows how the historical place transforms into a thing of fetish. Itís already participated and was awarded in several European photo festivals.

HERE AND NOW by Merien Morey features behind the scenes photographs of ballet dancers made in various European theatres. It emphasizes the beauty of a moment.

Series of photo books ARTIST FROM WITHIN WORKSHOP by Olena Saponova is a close view on number of most known artists in today’s Ukraine. Each book, printed in limited edition, is dedicated to one artist, and shows how they work on creating their art objects in their workshops.

One of the most unusual by its look, the book – THE MORNING DEW by Bogdan Gulyay. the eye is flowing smoothly along the curves, following lines, resting in the deeps of shadows and enjoying the reflexes of light on the body – this is how the photographer begins describing his photo book, hand made in form of an ancient scroll.

FRAGMENTS OF WAR by Dmytro Kupriyan is another limited edition hand made book that shows fragments of military weapon in actual scale which hit the walls and humans during the ongoing war in Eastern Ukraine. The fragments in close views looks like the parts of asteroids, with holes and beautiful shapes, and with their razor blade sides that could easily injure or kill. Now in safe they could be watched and studied in details.

The war, which has been going in Eastern Ukraine since 2014, attracts attention of other authors too. Brendan Hoffman, who is documentary photographer from USA, presented UKRAINE IN A TIME OF WAR – 40-pages self-published zine of photographs from the territory affected by the war, taken between 2014 and 2017.

The photo union MYPH (Mykolayiv Young Photographers) from Mykolayiv brought to festival number of books and zines by their members. Itís curated by Sergey Melnitchenko, whoís book BEHIND THE SCENES is photos from the project that he won the Leica Oskar Barnack Award Newcomer 2017 with. During a period of time when Sergey worked in Chinese night clubs as a dancer, he photographed what was happening backstage. The images reveal the reality of the other side of show on the stage.

UKRAINE. THE SEASONS by Yurii Shelest is a book of landscape photography taken during all the seasons of the year, and showing the variety of the nature in the country.

Among many books by young or relatively young authors, there were photo books by well known in Ukraine maitres: photographer Oleksandr Ranchukov with number of books, photographer and camera man Volodymyr Kukorenchuk, etc.

Artbook Publishing presented, among other its books, APARTMENT 20 by well known Kharkivís photographer Roman Pyatkovka. It contains pictures that were taken in Soviet and post-Soviet time: from eighties to nineties. The book is an attempt to comprehend this period through the concepts of corporality and sexuality, to tell about it by the means of visual art.

The recently founded Museum of Kharkiv School of Photography participated with books from patriarchs of the School and from younger generation of Kharkiv’s photographers as well. Their book KOCHETOV includes photographs taken in 1970-2000 years by father and son Victor and Sergey Kochetov who created recognizable ironic style of seeing daily life by hand adding color drawings to their photographs. Their photos influenced a whole generation of Ukrainian photographers, especially in Kharkiv, where they live and work.

Historically similar DNIPROPETROVSK PHOTOGRAPHY SCHOOL is dedicated to a phenomenon that formed from the end of 1970s to early 1990s in Dnipro (at that time – Dnipropetrovsk) in Ukraine. The book contains works of Mark Milov, Yuri Brodsky, Stanislav Polonsky, Semen Prosiak, and Oleksandr Feldman. Contrary to official at Soviet time ways to image the surrounding social reality, the photographers were picturing a sharp realism of the life.

Rodovid Publishing, which is also good known for its yearly competition of prospective photo books Ukrainian Dummy Award, showed recently published book of archival photography TEURA with works by Sophie Jablonska (1907-1971). Born in Ukraine, she went to Paris at twenty to study and to make movies. After 1929, she has traveled the world and took on her camera landscapes, architecture, and people of Morocco, Egypt, South-East Asia, New Zealand, Indonesia, Java, Bali, Tahiti, and Australia.

Some even more ancient archival photography was shown as well. Antiquity Admirers Club from Kryvyi Rih had couple of such their books, made by digitizing old negatives, including ones on glass, from museums’ collections.

Number of participants presented books that exist in one copy only, at least for now. Among them, UPHA by recently founded Booksha Publishing. It is a curated collection of photographs of 58 members of non-formal union Ukrainian Photographic Alternative. The publishing project centers around issues such as the formation of independent Ukraine; relationships, personal and those between people and power; the irony penetrating the mundanity; attitudes toward religion and issues of social inequality.

TO LUSY by photographer and designer Halyna Chepurna is another one copy book, which surrounds with photographs one historical love correspondence.

In the parallel lecture program of the festival, publishers and curators shared their experiences with young photographers in publishing photo books. There was a lecture dedicated to creating photo books with elements of augmented reality. Art historian Tetiana Pavlova, professor of Kharkiv State Academy of Design and Arts, told a story of making in 1972 underground series VIOLIN by Yevgeniy Pavlov, that is now published as a book. For the whole day the atmosphere of happiness surrounded all the floors of the art center the Izone Creative Community where the festival took place.